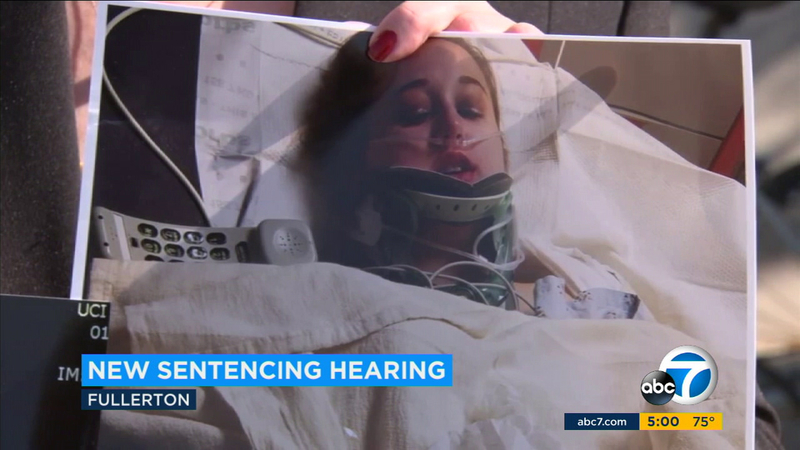 FULLERTON, Calif. (KABC) -- A hearing was rescheduled Thursday for a man charged in a DUI hit-and-run collision that seriously injured a Cal State Fullerton student.

Jorge Perez had pleaded guilty in the case, but he withdrew his plea after a judge decided to increase his sentence because prosecutors failed to notify the victim about the plea deal.

"We're moving in the right direction. Victims are going to be heard," said Bonnie Masters-Weber, whose daughter was hospitalized after the crash.

Perez ran a red light and struck then-20-year-old Jessica Weber and fled the scene. As Weber continues to recover, her mother says the talented musician may never play an instrument again.

"She played bassoon at Carnegie Hall," Masters-Weber said, her voice cracking with emotion. "We move forward."

In December, Judge Scott Steiner took the rare move overturning Perez's plea deal sentence of two years because the district attorney failed to give the family a chance to speak out about the crime's impact -- a constitutional right.

Perez's attorney, Benjamin Arsenian, said the defendant has "always been remorseful to me from the very onset of this."

"He would, yes, like to serve his sentence and move on with his life," Arsenian said.

The prosecution and the family's attorney asked for the sentencing to be delayed because of a discrepancy: The DA told the appellate court that the judge failed to ask if the victim wanted to speak. According to the judge, the DA said the family did not want to speak -- a significant difference.

"We kind of want to take a time out and see if there's maybe some things that we can press upon the appellate courts, to further strengthen Marsy's Law rights," said Mike Fell's, the family's attorney, referring to a California statute known as a victim's bill of rights.

In a statement, the Orange County District Attorney's Office said prosecutors had "clearly made an error in this case and upon discovering it, have proactively done everything within our power to rectify the situation."

Masters-Weber said that no matter the outcome, she hopes her daughter's case encourages victims everywhere to stand up for their rights.

"They're not going to get pushed around by life's events or cowards," she said. "So they're moving forward."