Fisherman survives after sleepwalking on boat, falling overboard: 'I wasn't going to let myself die'

He spent almost eight hours in the cold ocean waters off Ventura before he was miraculously rescued.
KABC
By Leticia Juarez 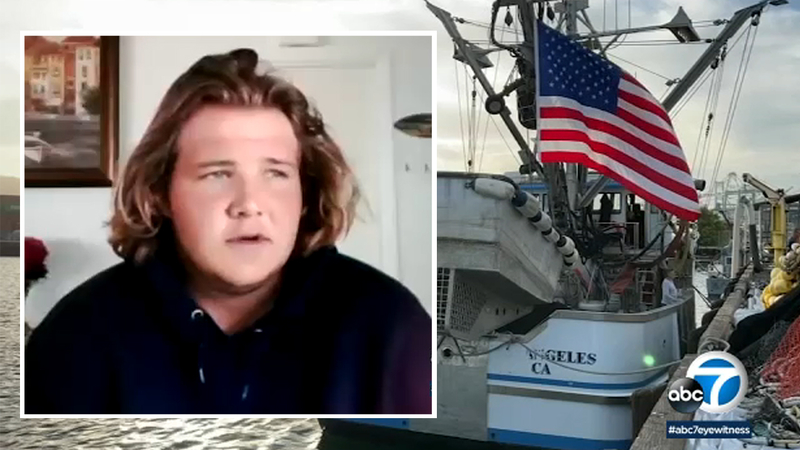 VENTURA, Calif. (KABC) -- Rescuers said "a miracle of God" saved a fisherman who fell overboard into Southern California waters when he woke up in the middle of the night and began sleepwalking off the boat.

Dylan Fogg expected a typical Thursday out at sea.

He spoke exclusively with Eyewitness News on Friday and said he went to sleep aboard the Crystal Bay - a commercial fishing boat - but woke up in the waters off Ventura.

"It was almost like a dream ... this can't be real," said Fogg. "Between around like three or five, I slept walked and somehow fell over the boat, hit the water, and woke up right away."

The 20-year-old said he has a history of sleepwalking when exhausted. As a commercial fisherman, he said he had just spent the last two days working on the boat fishing for squid.

"Normally, when I am on the boat, I try to prevent it by shutting the door and putting dogs on them and stuff," said Fogg. "That night, I was just tired and hopped in my bunk and forgot to do that."

When he found himself in the water, Fogg said he watched his boat pull away.

It was pitch black and the water was freezing cold.

"I just kind of put my head down and followed the swell and just started swimming, and that's all I really knew what to do," he said.

As a former high school water polo player, Fogg said his training kicked in immediately, but he also knew he needed to get to the shipping lanes right away.

"Definitely was scary, but at that point, it was kind of my best shot," he said.

More than six hours later, his crew realized Fogg was missing and put out a mayday call to the U.S. Coast Guard.

In audio obtained by ABC7, you can hear the fear in the captain's voice, worried of what was happening.

"I have an interesting situation here," he said. "We are a missing a crewman. His bunk is empty. We went to wake him up, his bunk is empty, and we've been searching the boat for five minutes. We don't know how long he has been gone. You go ahead and talk to me. I need some advice. It's spooky."

By the time the mayday call had gone out, three cargo ships had already sailed past Fogg.

Then, the 20-year-old saw a fourth ship approaching. That's when Fogg realized that was his last shot.

"I kind of got into position and had time to set up and get right where I wanted to be right where I knew they drive their ships," he said. "I got 50 yards away from the boat and started treading water and signally with my hands out of the water."

The carrier ship Ultra Esterhazy blew its horn signaling they had seen Fogg and quickly alerted the Coast Guard.

"A miracle of God found Dylan," said Crystal Bay Capt. Pence MacKimmie. "He was 12 miles offshore and 40 miles behind the boat. We never knew he went over."

After nearly eight hours in the water, Fogg was fished out of the water and rescued.

"It was definitely an experience, but just staying positive. I wasn't going to let myself die out there. I was going to make it to the beach one way or another," he said.

Fogg told ABC7 despite a frightening close call, he walked away with only slight dehydration.

He said he's ready to return to his crew.