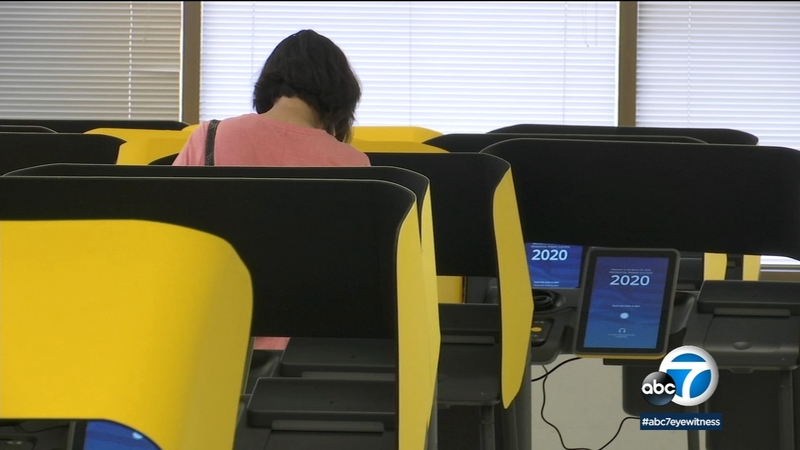 The county added hundreds of early voting centers over the weekend, including at the Hollywood Bowl where some voters were met with confusion. Multiple voters said the center was closed when they tried to cast their ballot Saturday afternoon.

Meanwhile, some were concerned over the electronic voting system. However, one man at the Hollywood Bowl voting center on Sunday morning said he experienced a seamless process.

"I think it could be a little daunting, a little scary for the older generation," voter Steven Campbell said. "But I think once you're actually standing in front of it, it's just a big screen and you're just tapping things, it's really easy. I think anybody could figure it out, especially with a little guidance."

Officials still suggest voters plan ahead to give enough time for lines and the new electronic voting system.

Meanwhile, Bernie Sanders is scheduled to hold a rally at 5 p.m. Sunday at the Los Angeles Convention Center while two of his Democratic presidential nomination opponents also plan to be in the region before Tuesday's California primary.

RELATED: Sanders, Biden and Buttigieg to campaign in Southern California ahead of Super Tuesday

The Vermont Senator is also set to hold a rally in San Jose and appear on the CBS public affairs program "Face The Nation'' earlier Sunday.

Sanders finished second in Saturday's South Carolina primary, receiving 19.9% of the vote. Former Vice President Joe Biden won with 48.4%. Biden is expected to be in California on Tuesday, according to ABC News.

Massachusetts Sen. Elizabeth Warren is set to speak Monday night at East Los Angeles College, delivering a speech recognizing the Justice for Janitors movement, according to her campaign.

Former South Bend Mayor Pete Buttigieg will visit Chula Vista on Monday. His rally is scheduled for 7:30 p.m. and is free to attend.