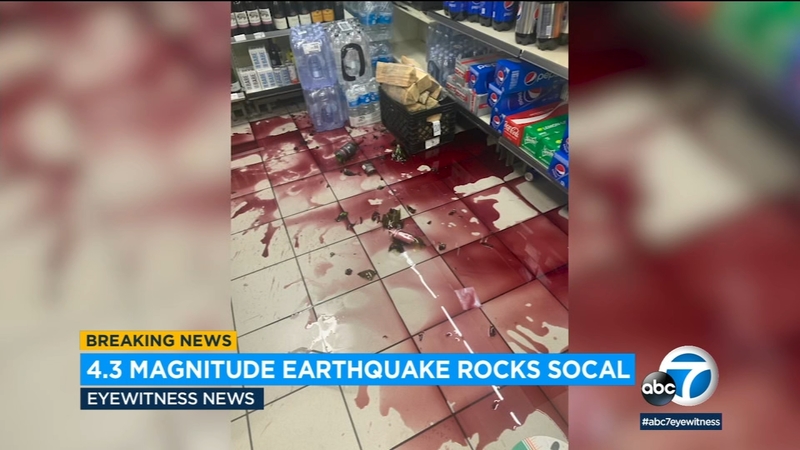 Reports of shaking were felt in the San Fernando Valley, Antelope Valley, Ventura County, Orange County and possibly as far south as San Diego, according to the USGS.

Seismologist Dr. Lucy Jones says the 4.3 earthquake could result in some "frightened cats" but no major damage even close to the epicenter in Carson.

There were reports of strong shaking near the epicenter and some photos posted online of books that fell off shelves. Also a flaring event was seen at the Carson refinery, but fire officials say there was no damage or danger to the public.

Stop with the earthquakes

Just got briefly shook by an earthquake here in LA - 4.4, epicenter in Carson. We had a similar jolt a few days ago. Everything is just fine at our house. Hazel didn't even bark. Hope the rest of the LA area is OK.

"All of a sudden, everything started shaking. A bunch of stuff off the shelves, there was wine everywhere, there was chocolate, syrup. It was crazy," said Brandon Axe, who working at a 7-Eleven store in Carson at the time the quake hit.

Seismologist Lucy Jones described the event as a "pretty ordinary earthquake" for the Los Angeles basin. She said other than "probably a lot of frightened cats," a quake of that magnitude would not cause major issues.

"There really shouldn't be any damage at all from something like this," Jones told Eyewitness News.

The Los Angeles Fire Department said it conducted an earthquake survey of local infrastructure and did not observe any damage.

The Los Angeles Police Department said it did not receive any significant reports of damage.

Currently there are no significant incidents to report related to the 4.3 magnitude earthquake.

Be prepared for potential aftershocks & only use 911 for emergencies. You can use 877-ASK-LAPD for non-emergencies in the City of Los Angeles. pic.twitter.com/YJk6ZHKXBP

A 4.3 magnitude earthquake struck in the Carson area Friday night, with shaking felt throughout the Los Angeles region.