Then and now: Remembering the 1933 Long Beach earthquake 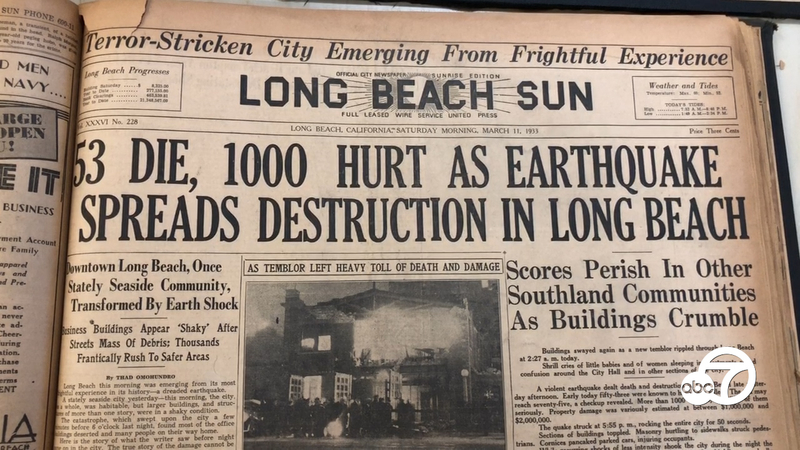 LONG BEACH, Calif. (KABC) -- In Southern California, we often hear about "The Big One:" the hypothetical 7.8 magnitude earthquake expected to happen along the San Andreas Fault.

"When you see a map of faults and see something smaller than the San Andreas, don't underestimate it," said Southern California Earthquake Center spokesperson Jason Ballmann.

The Newport-Inglewood Fault runs right through Long Beach and, 86 years ago, it wreaked havoc upon the city.

"The earthquake killed approximately 115 people, with over 1,00 injuries," said Historical Society of Long Beach historian John Royce. "The sense across the nation was that Long Beach had been leveled by an earthquake."

The 6.4 magnitude quake occurred at 5:54PM on March 10, 1933. The epicenter of the temblor was located off the coast of Huntington Beach. Most deaths were attributed to building collapse.

"It was the unreinforced masonry buildings that had the big problems," said Royce. "That affected our earthquake codes in California, even today."

So, what should we expect if something similar occurred in Long Beach today?

"We're not really concerned about building collapse if we had a repeat of the 1933 Long Beach earthquake," said Ballmann. "Our laws have gotten so much better when it comes to building codes."

"Right now, there are no retrofit laws that mirror what the City of Los Angeles has passed over the years," Ballmann said. "But I think we're on a surprising upward trend in that people are thinking about it and we're starting to have these conversations."

"Learn how to use a fire extinguisher, take that Community Emergency Response Team class at the fire department," Ballmann said. "Most importantly, knock on your neighbor's door. Get engaged."

"There's no time to talk about an earthquake like after an earthquake," Royce said. "To me, that represents how we can learn from the past."