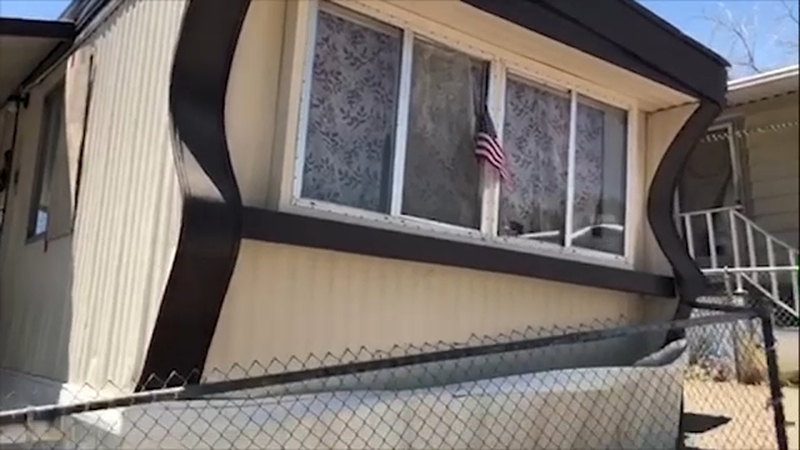 RIDGECREST, Calif. (KABC) -- A magnitude 6.4 earthquake struck Thursday morning in the Mojave Desert's Searles Valley, rattling nerves on the Fourth of July and resulting in minor injuries and a structure fire in the city of Ridgecrest.

The temblor was marked as the strongest earthquake in the Southern California region since 1999.

People throughout Southern California reported feeling the powerful 10:33 a.m. quake, whose epicenter was located about 62 miles north-northwest of Barstow, according to the U.S. Geological Survey.

"It's like you would out of a movie, everything shakes. The whole ground shakes beneath you, the whole house. Everything fell in my kitchen, it's still on the floor. I haven't even had time to clean it up," said Ridgecrest resident Sara Baird.

In nearby Kern County, firefighters responded to nearly two dozen incidents including medical emergencies and reports of a burning home.

Cal OES officials said no fatalities and no major injuries were reported. Only minor to moderate injuries and damage were reported in Ridgecrest.

About 1,300 people were without power at one point, according to the Kern County Fire Department.

Twenty patients were evacuated from Ridgecrest Regional Hospital as a precaution amid a slew of aftershocks, nine of which were measured at magnitude 4.0 or above. Many of the patients were transported to Antelope Valley.
EMBED More News Videos

The Palmdale Regional Medical Center has taken in some of the patients evacuated from the hospital in Ridgecrest following a 6.4 earthquake.

Mayor Peggy Breeden and Gov. Gavin Newsom each declared a state of emergency in the city.

"The first thing that we felt was this dramatic shaking. All we could think was, 'protect the children," one resident said.

One man said he was almost knocked off of his bicycle when the quake hit.

"It felt like someone was trying to pull my bike out from under me, left and right," said Scott Lynch. "By the time I noticed it, I started looking around and everything around was just swaying."

The Walmart in Ridgecrest was one of many businesses that closed. The store was giving out water and Gatorade to people who were stuck in the summer heat and were without power at their homes.

Grocery store aisles were covered by items that went flying off shelves. Inside Eastridge Liquor, employees said they lost thousands of dollars in merchandise.

Two mobile homes at the Trousdale Estates mobile home park were knocked off their foundations and tilted sideways. They were both deemed unsafe by police. The residents did their best to salvage what they could.

"There's a crack in the center of the mobile home going across the mobile. During the earthquake, my sister went to grab my granddaughter and the tilting of the mobile threw them into the closet," said resident Shannon Anderson.

Seismologist Dr. Lucy Jones said a magnitude 4.2 foreshock occurred about 30 minutes before the larger quake, adding that the area near the epicenter experienced "lots" of 5.0 magnitude quakes in the 1980s.

With the number of aftershocks after the 6.4 earthquake, the chances go up drastically to see another large quake in the next few days.

Thursday's seismic event did not occur on the San Andreas Fault, Jones said. The small fault in Kern County "was producing energy for about 5 seconds," she said. "What you feel is that plus reverberations."

The USGS downgraded the temblor's magnitude, which was originally reported as 6.6.

More than 100 aftershocks have occurred in the area since the major quake hit, according to David Witt of the Kern County Fire Department. There was even an aftershock while authorities briefed the public on their response.

More are expected, and there is a small chance there could be an earthquake as large as the initial one within the next 24 hours.

"The aftershocks are very real and the whole foundation still moves, so it is not safe for anybody to go in there," Baird added. "We have moved the tenant to another place. She's with family right now."