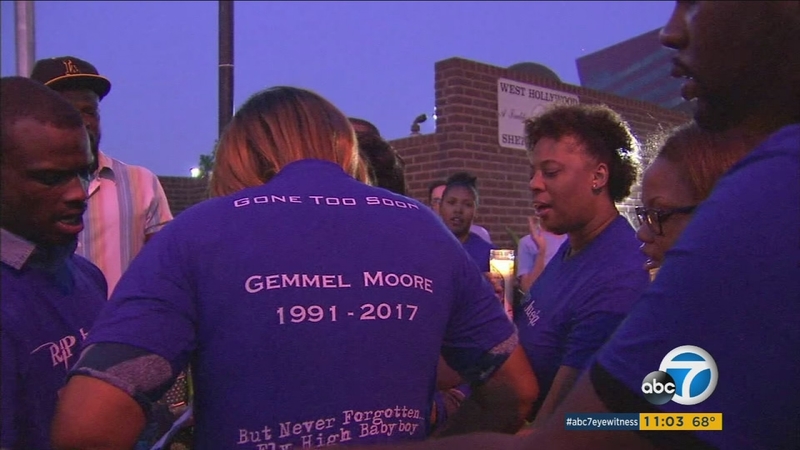 WEST HOLLYWOOD, Calif. (KABC) -- A candlelight vigil in West Hollywood was held Friday to remember 26-year-old Gemmel Moore, who died of a drug overdose in July at the home of a Democratic Party donor and political activist.

There was more to the gathering than honoring Moore. His death was originally ruled accidental, but the Los Angeles County Sheriff's Department's homicide bureau is now investigating further. Those gathered outside the sheriff's station in West Hollywood said they believe there was foul play.

"I am looking for justice. For Ed Buck to be indicted. I want Ed Buck to go to jail for what he did to my son," Moore's mother Latisha Nixon said.

Eyewitness News spoke with Buck's attorney, who said his client had no statement at this time, but there were numerous claims against Buck.

"When you hear the account of some of the other victims, who said that they came up here to the West Hollywood sheriff's station and tried to file police reports on Ed Buck, but were basically told 'you're tweeking, get out the station,'" activist Jasmyne Cannick said.

Los Angeles City Councilman Mike Bonin was in attendance and said he would be contacting the department and district attorney's office about the case.

"For someone to look into the stories of the young men who said they came to the station and tried to make police reports and were turned away," he said.

But at its core, the vigil was about a family hurting and simply looking for answers.

"We all failed him. I just hope that the sheriff's department does not fail my son. I'm asking for justice," Nixon said.

Buck's attorney had released a statement earlier this week regarding the case.