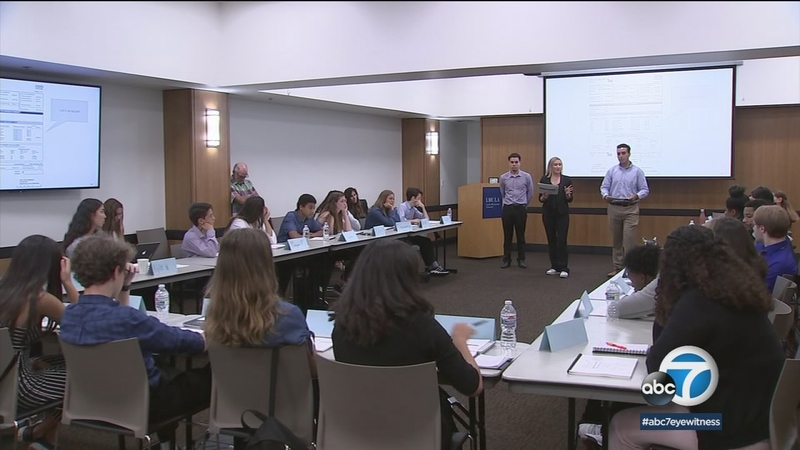 "I'd be worried about my own generation and the one behind us, because this is the kind of stuff that needs to be taught in high school, and it's not," said Matthew Tejada, a 21-year-old majoring in entrepreneurship at LMU.

"I would give everything to learn what they're learning these days, because I knew none of it," said Tejada.

The high school students are also learning how to read credit card statements, interest rates, taxes and how to save money.

"My mom told me the things I'd be learning in here are just really, really important, and she didn't know until a lot later," said 14-year-old Rolin Weber from El Segundo.

"It's kind of been discussed at home," added 14-year-old Amelia Schulte from Los Angeles. "But now I understand more."

A recent TD Ameritrade online survey of 1,519 millennials found that 50 percent had credit card debt, 36 percent said they had student loan debt and 40 percent had car loan debt. On average, they also expected to retire by the age of 56.

The LMU student instructors are also taking their lesson plans to local middle and high schools throughout the school year.

"Whether that be about the stock market, or something simple such as budgeting your savings, or how to buy a car, that tends to get people really excited," said Darlene Fukuji, associate director at LMU's Fred Kiesner Center for Entrepreneurship.

"The kids aren't looking at parent figures telling them how to manage money. They're hearing from older kids who are really able to relate," added Dayle Smith, the dean of the College of Business Administration at LMU. "And all of a sudden there are these aha moments that these kids are having as they learn about those concepts."

While it might not be the most exciting moment of their summer break, many of the teens are glad they showed up.

"A lot of time people say money is power, but in reality, how do you get that money? With knowledge," said Weber.

"Just saving, even just a couple bucks a week...simply starting that when they are in middle school, if they can just learn how to budget at a very early age," Tejada said.