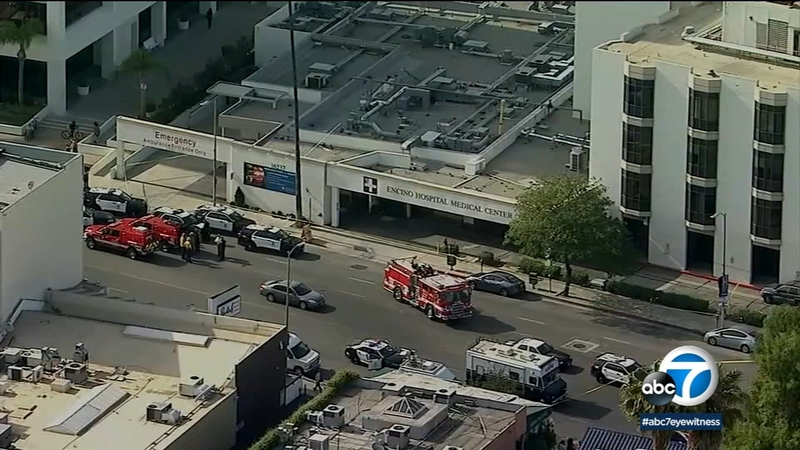 ENCINO, LOS ANGELES. (KABC) -- A doctor and two nurses were seriously injured after they were stabbed inside the Encino Hospital Medical Center, according to authorities.

The incident unfolded at around 4 p.m. at the facility on Ventura Boulevard.

According to the Los Angeles Police Department, the suspect - a man believed to be in his mid-30s - parked his car in the middle of the street and walked directly into the hospital emergency room asking for medical treatment for anxiety.

Soon after, the suspect allegedly stabbed the doctor and two nurses in an area of the emergency room. One victim is said to be in critical condition and the other two are stable.

There were no other injuries reported, according to police.

Chief Alan Hamilton with LAPD said the suspect then barricaded himself inside of a room, prompting an hours-long standoff.

A SWAT team arrived and entered the building, eventually apprehending the suspect.

He was taken to another hospital for treatment due to injuries police believe were self-inflicted.

The suspect will be booked upon his release.

Hamilton said a knife that is about 3 to 4 inches long was recovered from the scene.

He also said the suspect has a prior criminal record. Authorities said he had previously been arrested twice, most recently for battery of a police officer and resisting arrest sometime last year.

There is no information that makes authorities believe the suspect has any prior relationship with the victims.

Lauren McAllen, a surgical technician, works at a medical center next door to the Encino Hospital Medical Center.

She said many doctors perform surgeries in that building.

"It's horrible," McAllen said. "I mean, you're two buildings down and that could've been any of us. It's terrible. It's just disheartening, and with all this other stuff going on these days, this hits really close to home."

The hospital was placed under a lockdown and was closed to patient arrivals during the investigation.

Ventura Boulevard was also shut down throughout Encino as officers continued their work.