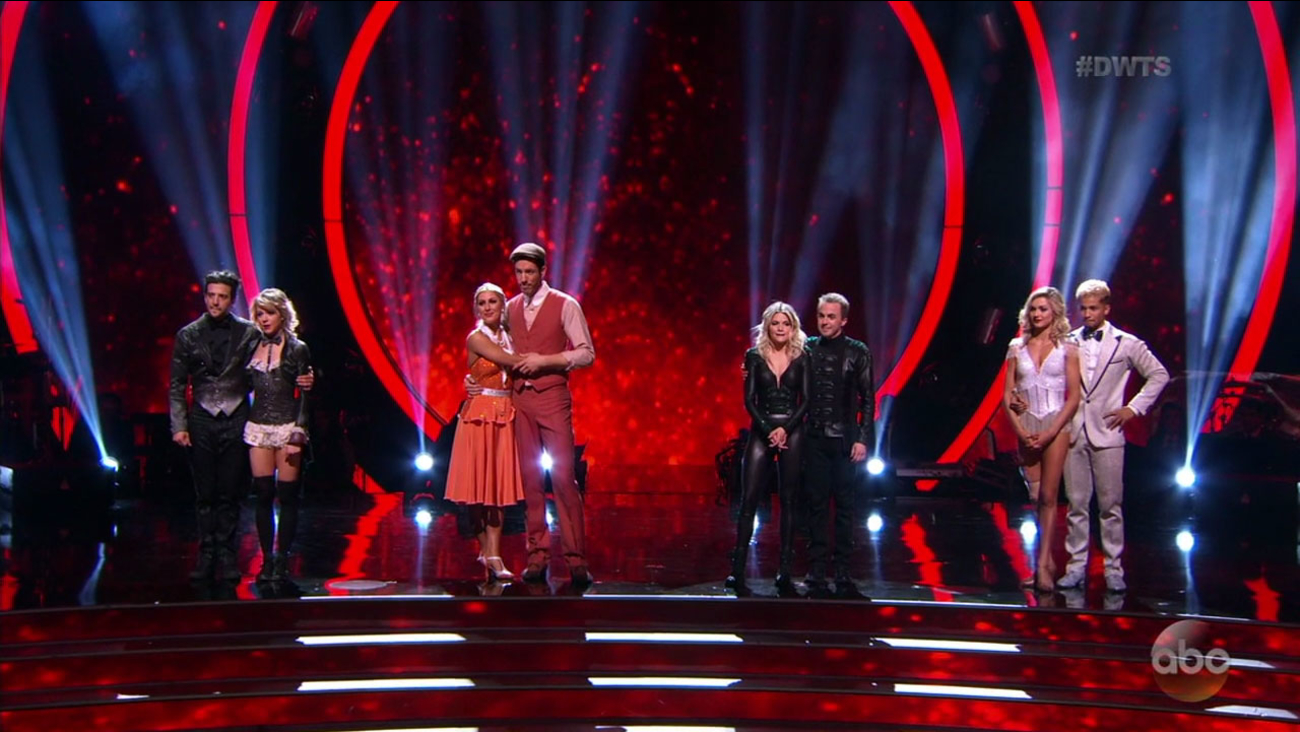 The final four couples of "Dancing with the Stars" are shown during the elimination ceremony on Monday, Nov. 20, 2017.

LOS ANGELES -- The end is in sight for what's been one of the most competitive seasons ever on "Dancing with the Stars."

The four remaining couples kicked off a two-night finale on their quest for the mirror ball, and gave us a show filled with dancing, music and more. Monday's competition involved a "redemption" dance (which also included a rehearsal visit from a judge), and the always fun freestyle. Plus, the return of Julianne Hough to the judges table!

Here's a recap of the night's scores, from highest to lowest:

Head judge Len Goodman was drafted to help Jordan and Lindsay with their Charleston. They did the dance in week three and, as Len remembered it, there was very little Charleston in the routine. He wanted to see something more "proper." The duo was still playing hurt; Jordan had an eye abrasion and Lindsay's knee gave her grief. But they powered on! Len was thrilled that they listened to his critiques and not only filled the dance with more content, but also more energy. Bruno Tonioli agreed the content was as sharp as a samurai sword, and Carrie Ann Inaba thanked Jordan for continuing to push himself all season. Julianne Hough said watching them turned her from a judge into a fan.

Lindsay knew she had her work cut out for her with the freestyle. She wanted to prove they can live up to the expectations. They "Put on the Ritz" and used every type of dance style, with added flips and lifts for good measure. Len thought it was brilliant. Bruno and Carrie Ann both wanted to see where it leads Jordan next in his career. Julianne said DWTS took him to another level.

Julianne helps out her childhood friend Mark with Lindsey and her Quickstep. They did it in week two and Julianne knew Lindsey has vastly improved. They did their coaching sessions over Skype, but it worked. Julianne made several suggestions that helped them achieve perfection. Julianne thought they nailed posture, and still had plenty of power. Bruno called the dance criminally good and silky smooth. Carrie Ann gave Lindsey her vote for most improved, and Len told the professional violinist there was no fiddling about on the dance floor - the dance was awesome.

Mark has a reputation for pulling out all the stops on the freestyle and he knew he had some great "clay" to mold with Lindsey. They came up with a "conductor" theme, and even used Lindsey's violin at one point. Carrie Ann thought the dance showcased Linsey's uniqueness and called the routine "you, on crack, dancing." Bruno stood and applauded - "Bravo, Maestro!" And it was Len who pointed out that we have a real war on the floor for Tuesday night's grand finale.

The redemption assignment was the Foxtrot and Frankie and Witney had Carrie Ann as their guest coach. The judge said she saw a spark in Frankie from the very first week and she wanted him to really focus on his confidence. Carrie Ann even had Witney give him a solo at the top of the routine! After the performance, Carrie Ann said she felt Frankie really transformed, and she appreciated the freedom he showed on the dance floor. Len thought the dance had more polish this time around. Julianne felt transported back to the Golden Age of Hollywood, and Bruno told Frankie he commanded the stage.

There was actually some drama surrounding Frankie's freestyle. Witney had an idea for something different, dark and powerful, but the producers questioned her going away from Frankie's sweet, fun fan base. Witney went with her gut (with Frankie's blessing), and their routine ended up as what Bruno called a mix of Janet Jackson, Tango, and Paso Doble. He and Julianne awarded "10s," and both Len and Carrie Ann dinged them a point but still liked what they saw.

Bruno dressed up like a construction worker to help Drew "makeover" his Paso Doble. The judge challenged the "Property Brother" to really commit this week, and told him he's the dark horse of the competition. There was a real breakthrough in the ballroom for Drew and Emma, and Bruno said he couldn't be more proud. Carrie Ann called it his best dance yet. Len praised his finesse, polish, and attack, and Julianne called him most improved of the competition.

For the freestyle, Emma wanted to celebrate Drew's quirky, fun nature. They both also wanted to highlight how much he's improved. Emma admited that after week one, there was no way she thought she'd still be there for the finals. Len reminded Drew that in that first week he'd called him a "fixer upper." Len said now that house is fixed and Drew is a "hot property." Julianne thought the freestyle routine exuded the joyful essence of Drew. But Carrie Ann was the wet blanket of the group and called them out for being a bit out of sync when some of the troupe members joined them in the routine.

One couple was eliminated; the other three will perform twice on Tuesday for the rights to the Mirror Ball Trophy.

It was Drew Scott and Emma Slater's turn to hang up their dance shoes.
Report a correction or typo
Related topics:
arts & entertainmentcompetitiondancetelevisionmusicabcdancing with the starsballroom dancingreality television
DANCING WITH THE STARS 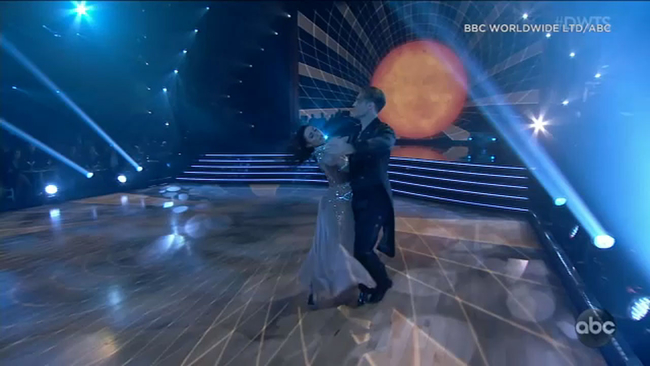