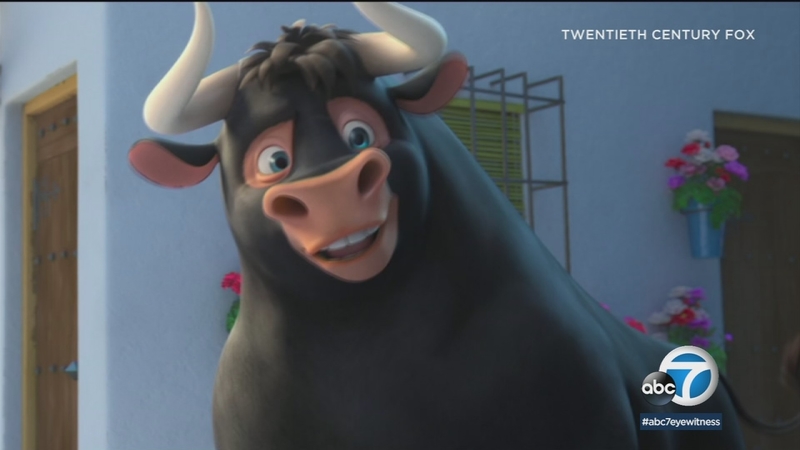 LOS ANGELES (KABC) -- The story of a "Ferdinand" the peaceful bull has been a favorite children's book for 80 years.

It's now a feature length movie, with WWE star John Cena voicing the title role of a lovable bull who doesn't want to fight -- he prefers to stop and smell the roses and travel down the conflict-free road of life.

Cena discovered doing voice work for an animated adventure isn't that much different from his "day job" in the wrestling ring.

"WWE we go really big," said Cena. "And then you kind of have to tone it down for movies because even the smallest gesture can mean so much. But then the animators were like no, no, we need more! I like hearing that. Because I'll run thru the china shop. In a costume. It's like I don't care. Animation is big and beautiful and daring and you have to get that energy out especially in this movie where they go on a crazy adventure."

While on this crazy adventure, Ferdinand and his friends learn a major lesson: Have the courage to be true to who you are.

Gabriel Iglesias lends his voice to a hedgehog named Cuatro; Boris Kodjoe is a show horse named Klaus. They both agree there's a definite message in "Ferdinand."

"It's fun, it's a family movie and it teaches kids to be confident in who they are," said Kodjoe. "And to find your own path. To be kind and to not be bullied."

"No bad influence," said Iglesias. "Because believe me, Ferdinand gets a lot of pressure in this film and he sticks to his guns."

"I think it sends a wonderful message," added Cena. "Just because you look a certain way doesn't define you as a human being."