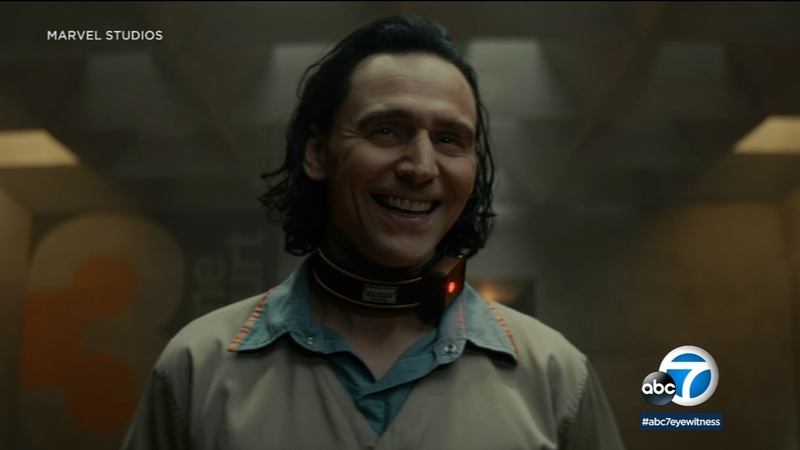 HOLLYWOOD (KABC) -- Tom Hiddleston began playing "Loki," the god of mischief, 10 years ago in the original "Thor" movie. He also showed up in a couple of "Avengers" films. Now, Tom's back playing Loki again, this time in his own series on Disney+. And he's in good company.

And, we know the Marvel Cinematic Universe is known for its complicated plot lines. So, when it comes to the new Disney+ series, "Loki," let's just say it takes place after the events of "Avengers: Endgame." And Loki is in a different place. Perhaps even getting to know himself a little better.

"I think you're very close to the bullseye there, sir," said Hiddleston. "Loki is stripped of everything that's familiar. And so he can't play--the trickster cannot play his old tricks. And he's made aware of aspects of himself he's perhaps never had to examine."

Owen Wilson is also part of the fun, playing a character who spends a lot of time with Loki: Agent Mobius.

MORE | Everything to know about 'Loki' on Disney+

"I definitely needed the Marvel tutorial," said Wilson. "Tom Hiddleston was very generous in kind of spending a few days with me in just explaining the whole mythology and lore. And that really was helpful."

"If there were any questions about anything, we could just be like, 'Tom, wait, what does this mean?' said co-star Gugu Mbatha-Raw. "And, like, you know, and he would just absolutely, you know, have all the answers."

"I loved scratching underneath the surface of that exterior armor and trying to find out who he is, you know, what makes Loki, Loki!" said Hiddleston.

The first episodes of "Loki" are playing now on Disney+.

He's Thor's trickster brother, and it seems Loki has more tricks up his sleeve. The God of Mischief is back, this time with his very own series on Disney+.

On The Red Carpet presents a sneak peek at upcoming Marvel movies and TV shows, as well as the new Avengers Campus at California Adventure.