Maná brings its 'Rayando el Sol' tour to the Forum: 'There's a lot of emotions going on' 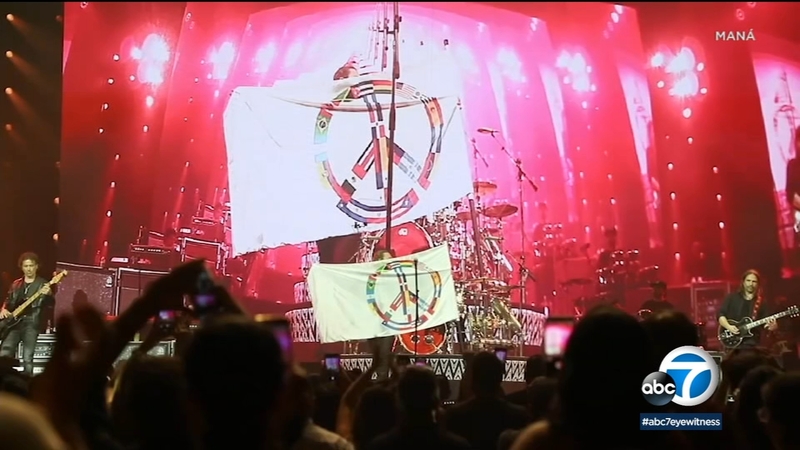 Maná brings its 'Rayando el Sol' tour to the Forum

INGLEWOOD, Calif. (KABC) -- They are Grammy Award-winning, chart-topping and heart-stopping.

Maná is back in Los Angeles for their "Rayando el Sol" tour, featuring some of their greatest hits.

While the "rock en español" band formed in Mexico, they credit L.A. for launching their career in the U.S.

"It's the mecca of rock 'n' roll," drummer Alex González said in an interview with ABC7. "This is actually where our career started, in the United States."

They write about love, life and politics -- blending rock, reggae and regional Mexican music, among other genres.

"It's overwhelming because, you know, it's incredible now in these seven shows that we've done - we just kicked off the tour - to see parents with their kids and teenagers," González said, "and you see grandparents."

And not all their fans are Spanish-speakers.

"I'm going to tell you something really important," said lead singer Fher Olvera. "We enjoy so much that a lot of American people, Anglo people, that is not Latin, is coming to our concert to share.

"And I say - I try to talk a little bit, too, English: Para los gringos amigos, welcome to our show," Olvera added.

They will be the first artists to perform at The Forum seven times in the same year, since it was renovated in 2014.

The band started in the 1980s. The current four members have been together for 24 years.

Guitarist Sergio Vallín said they primarily have a love for music, they're friends and put the band first.