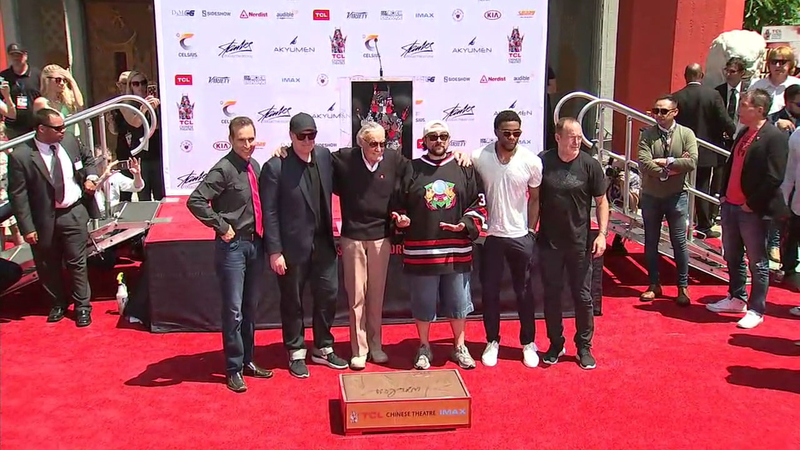 Director and comic book nerd Kevin Smith was master of ceremonies as he introduced speakers who gushed over Stan Lee's influence on comics and Marvel's legacy.

"Playing in your world, Stan, in the Marvel world means that we get to wrestle with timeless themes of good and evil in a magnificent universe made up of enhanced beings, aliens, alternate dimensions, and - it can get tricky sometimes - sentient LMDs," Gregg said. "Which means for me, every day is bring your inner child to work day."

"You have to think about it's beyond civil rights. It's black empowerment. We as African-Americans, we're not just victims. We're not just the colonized. We're not just slaves. We were kings and queens. We're advanced in an advanced scientific nation...we had abilities beyond what other people knew," Boseman said.

When Lee finally went up to thank everyone for their kind words, he said he couldn't be where he is today without surrounding himself with great people.

"I've been the luckiest man in the world because I've had friends and to have the right friends is everything," he said. "All I can say is...I thank you from my whole heart! You've made this day, certainly, totally unforgettable. Excelsior!"

Lee also took a moment to say he was blessed with a wonderful wife, Joan, who died on July 6 at the age of 93.

Lee was also honored over the weekend as a Disney Legend at the D23 Expo.

The comic book giant was born Stanley Martin Lieber on Dec. 28, 1922 in New York City. He began his career in 1939 and eventually would write comics under the name Stan Lee, which he adopted as his legal name later on.