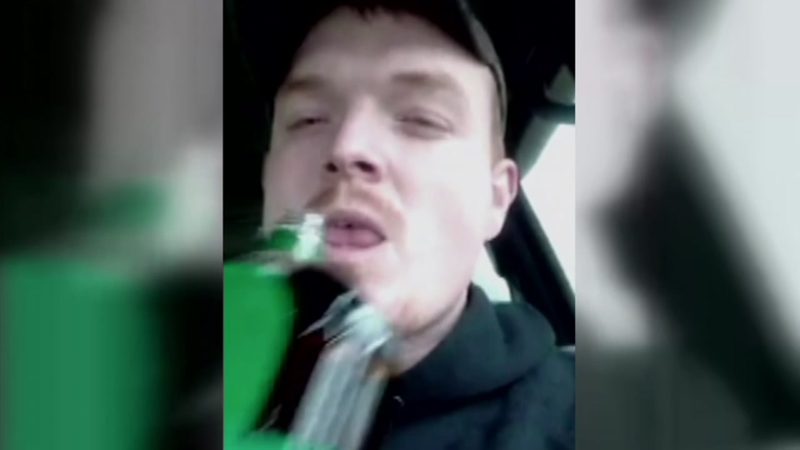 Sheriff: Drunk driver posts Facebook video of himself behind the wheel

FRANKLIN COUNTY, Ohio -- Many of us have posted things on social media that we have lived to regret.

For some, it resulted in a spat with relatives or friends with hurt feelings. But an Ohio man is facing serious consequences after a Facebook posting that landed him in handcuffs.

Franklin County Sheriff Zach Scott said Dustin Rittgers, 28, posted a 12-second video on a personal Facebook page with no privacy settings of him taking a swig of alcohol while behind the wheel of a car.

He looks into the camera while music plays in the background, then raises his eyebrows and takes a swig from a partially covered bottle. He doesn't speak. As the clip ends, the camera is flipped around to show his hand with only one finger raised to guide the steering wheel as a wiper moves across the vehicle's windshield.

"You've got a distracted driver and a drunk driver just exponentially causing danger wherever he went," Scott said.

Rittgers responds, "I am a good driver, don't worry," and goes on to comment, "I've got one finger on the steering wheel Facebooking while it's raining. Smh, i am good. I am a pro."


Scott said we need to remember that Rittgers is typing all of this while he's driving.

"He's got his hands full when he's trying to drive," Scott said. "He's drinking and he's paying attention to his phone. I mean we are I think very fortunate this didn't end with some type of tragedy."

Deputies tracked the suspect's car down and pulled him over near State Route 665 and Hibbs Road.

The suspect pleaded not guilty Tuesday in Franklin County Municipal Court on five misdemeanor charges, including operating a vehicle under the influence of alcohol or drugs and having an open container in a vehicle.

"There's no privacy issues going on here," Scott said. "He posted. He confessed. He gave us the evidence."

"He's really smart, he's just going through a lot," said Rittger's girlfriend, Amber Boothe. "It's too much for him to handle."

Rittgers has faced OVI charges twice before, in 2007 and 2011. Court records indicate Rittgers pleaded guilty earlier this year in a separate impaired-driving case stemming from a September 2014 stop by state troopers.