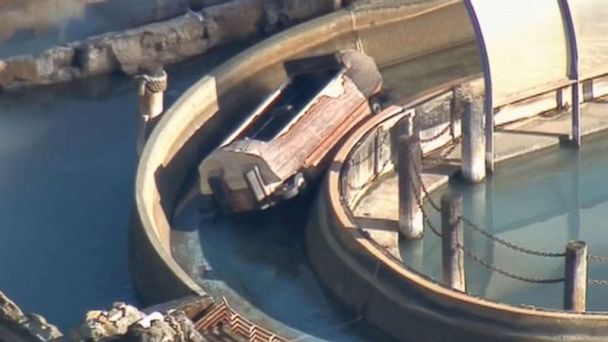 A woman was critically injured and her husband and child were also hurt when a water log ride at a California amusement park malfunctioned and flipped over, throwing them from their seats, officials said.

The incident occurred at Castle Park in Riverside on the Log Ride, which, according to the park's website, features a 48-foot drop.

Riverside Fire Department officials said they were called to the park at 4:37 p.m. and said three members of one family were tossed into the water after something went haywire with the log they were riding in and overturned.

"One of the injuries we categorized as critical. With the two others being minor. All were transported to a hospital," a fire official at the scene told ABC Los Angeles station KABC.

Witnesses said a 10-year-old boy injured in the incident appeared to suffer a cut to his ear and head injuries, while his father suffered scrapes to his arm and back.

The names of the injured family members were not released.

Video of the incident showed the injured boy and his father in the water after the log they were in flipped over.

An investigation is underway by the California Department of Health and Safety to determine the exact cause of the malfunction.

The Log Ride was immediately shut down pending the outcome of the probe, officials said.