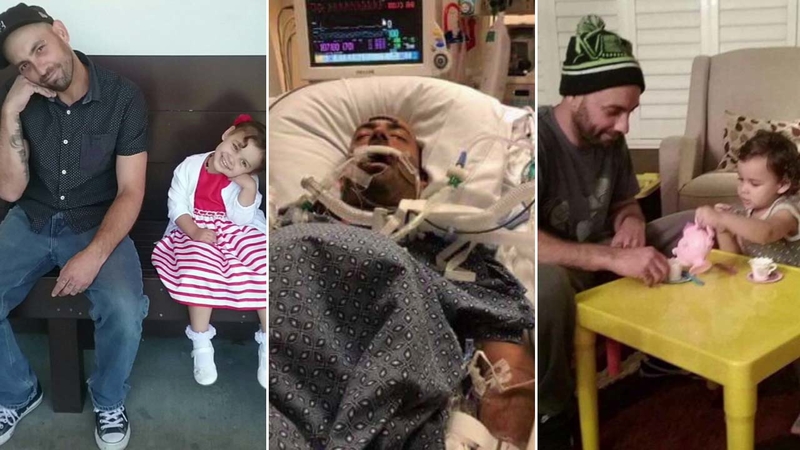 COLTON, Calif. (KABC) -- A local father is fighting for his life after he was mowed down by a hit-and-run driver while on his bicycle in Rialto.

The driver of that vehicle fled the scene without rendering aid, Welch's family members said.

Welch remained lying on the street - severely injured but conscious - while other vehicles passed him by. After about half an hour, he was able to crawl to his cellphone and call for help, his family said.

He has been in a medically induced coma at Arrowhead Regional Medical Center in Colton following surgery to repair a rupture to his intestines.

"You know, we live in a fallen world, and when you can do this to a human being, I mean, it's very sad because, what if it was one of your family members? You know, how would you feel?" said Yolanda Gaytan, the great grandmother of Welch's 3-year-old daughter.

Welch's daughter calls her dad her superhero. She said she wants the hit-and-run driver to come forward.

Welch's family says he took a turn for the worse on Monday. His family members were called to the hospital, and they thought they may need to say their last goodbyes. However, relatives say Welch has improved since then, and he is now breathing on his own, though he remains on a ventilator.
Report a correction or typo
Related topics:
rialtocoltonsan bernardino countycar crashhit and runsearchbicycle crashtraffic accident
Copyright © 2021 KABC-TV. All Rights Reserved.
More Videos
From CNN Newsource affiliates
TOP STORIES