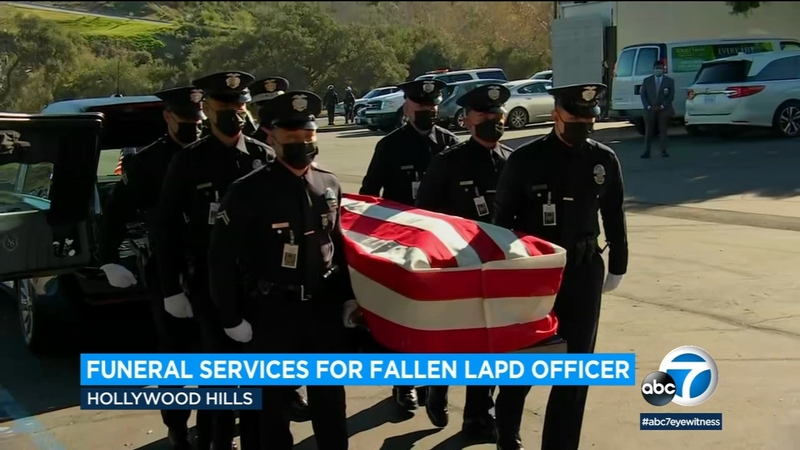 The outdoor service, held at Forest Lawn's Hall of Liberty Mosaic Deck, was attended by family members, city leaders and hundreds of fellow law enforcement officers. It was not open to the public but media coverage was allowed.

"Our deepest condolences, our heartfelt sorrow," LAPD Chief Michel Moore said, addressing Arroyos' family members during a eulogy. "We join you in this grievous moment. Thank you for the privilege to stand here today. I know my words will be inadequate, but I will try to relay to you the love and support of the entire Los Angeles Police Department."

Arroyos, 27, was gunned down during a robbery at 9:15 p.m. on Jan. 10 in the 8700 block of Beach Street in South Los Angeles. Authorities said Arroyos was targeted while he was house-hunting with his girlfriend.

"We've lost and angel in this city of angels," Mayor Eric Garcetti said. "We've lost somebody whose chapter is now written here -- and what a chapter it was. The chief went through this incredible story of what we dream we can produce as a city.

On Wednesday, Jan. 26, organizers held a day-long barbecue fundraiser outside of the LAPD Olympic Station on Vermont Avenue to help raise money for the family of Fernando Arroyos.

Arroyos is survived by his mother, father, girlfriend, grandfather and stepfather.

On Jan. 27, a federal grand jury returned an indictment against three alleged gang members and one associate for the crime. The three men and the 18-year-old girlfriend of one defendant were charged with violating a federal racketeering statute.

Arroyos graduated with honors from UC Berkeley. His mother described her son as someone who simply wanted to serve his community.