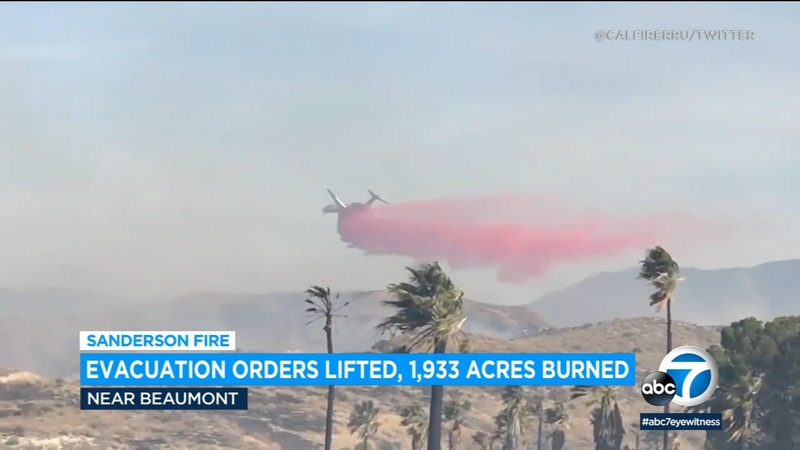 BEAUMONT, Calif. (KABC) -- A brush fire that erupted early Sunday morning near Beaumont spread to 1,933 acres before firefighters were able to stop its forward spread.

The Sanderson Fire was reported about 1 a.m. near La Borde Canyon Road and Jack Rabbit Trail, according to the Riverside County Fire Department.

No injuries or structural damage were reported.

Shortly before 9 a.m., an evacuation warning was issued for an area that included North Gilman Springs Road and South Timothy Lane, just south of the 60 Freeway. Less than a dozen homes were affected by the warning, officials said.

The evacuation warning was lifted just before 1 p.m.

A brush fire that erupted near Beaumont spread to 900 acres and was burning out of control as firefighters attacked it on the ground and from the air, officials said.

By 1 p.m., the county fire department said the fire had spread to 1,933 acres as firefighters had stopped the forward progress and reached about 10% containment.

"Firefighters had difficulty accessing the fire due to its location deep into rugged terrain," Cal Fire said in a statement.

At least 130 firefighters were on the scene, the agency said. Helicopters and fixed-wing aircraft were seen dropping water and Phos-Chek on the flames.