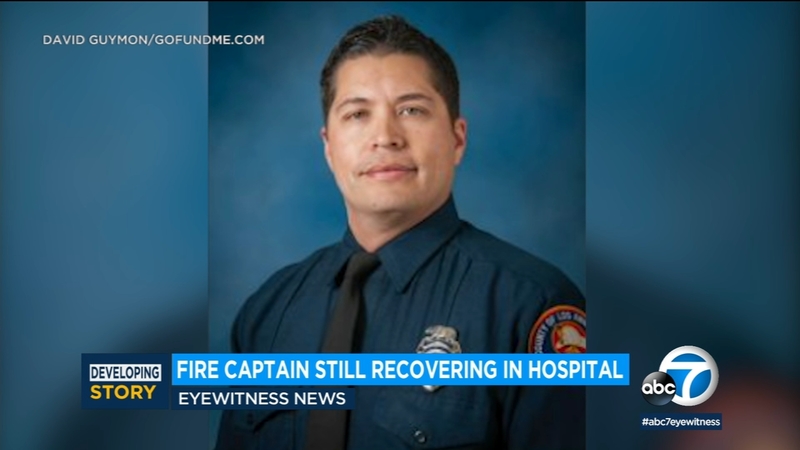 AGUA DULCE, Calif. (KABC) -- A Los Angeles County fire captain who is fighting for his life after being shot at his fire station in Agua Dulce last week has been identified, and a GoFundMe page for his family continues to grow.

Captain Arnie Sandoval, 54, has undergone multiple surgeries and is expected to survive after the shooting in which investigators believe the gunman was a disgruntled off-duty firefighter.

The suspect fatally shot a fellow firefighter at the station just before 11 a.m. Wednesday, and wounded Sandoval, who was not believed to be intentionally targeted in the shooting.

The shooter has been identified as Jonathan Patrick Tatone, 45, who then drove to his own home in Acton, set it on fire and took his own life. Tatone and the deceased victim, firefighter Tory Carlon, had been involved in an ongoing work-related dispute that has not been specified.

Sources told Eyewitness News that the suspect was a firefighter who shot and killed another as part of an ongoing dispute.

Sandoval has had a long career of public service, first as an L.A. County sheriff's deputy before switching tracks and joining the fire department.

A GoFundMe page for Sandoval has received over $30,000 and counting.

A GoFundMe has also been created to help Carlon's family. The page has raised over $200,000.

Details on funeral plans for Carlon, including when the service will be held, have not been released.

The daughter of the firefighter who was killed at the Agua Dulce station graduated from high school Thursday, wearing her father's firefighting jacket as she tearfully received her diploma.