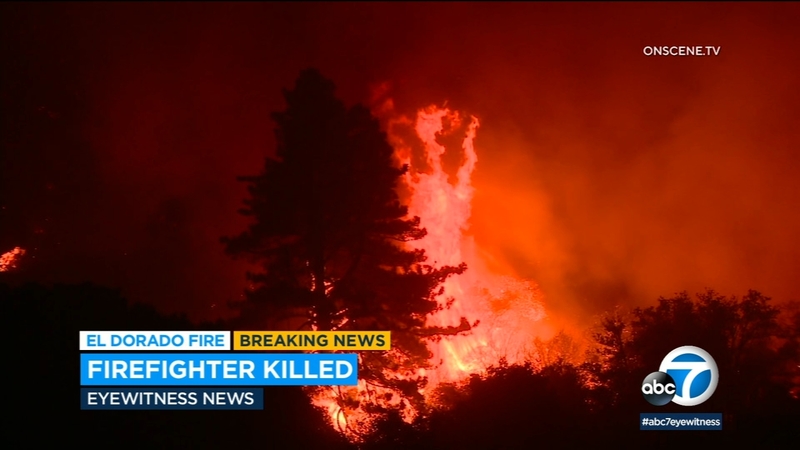 The U.S. Forest Service said the death happened Thursday, but did not release more details.

"Our deepest sympathies are with the family, friends and fellow firefighters during this time," the agency said in a statement.

The name of the firefighter has not been released until family has been notified. The cause of the death was under investigation.

A procession was held Friday afternoon for the firefighter who died battling the blaze.

The El Dorado Fire, which erupted Sept. 5 near Yucaipa, has burned more than 21,000 acres and was 66% contained as of Friday afternoon. Crews are trying to stop flames from crossing Highway 38.

Officials said the blaze was caused by a smoke-generating pyrotechnic device used during a gender reveal party.

A smoke-generating pyrotechnic device used during a gender reveal party sparked the El Dorado Fire burning near Yucaipa, which has charred more than 7,000 acres, officials say.

A map of evacuation areas can be found here.

The mandatory evacuation areas include Angelus Oaks, Seven Oaks and an area to the east past Sugarloaf Mountain and the Heart Bar Campground.

Some evacuation orders were lifted Friday just to the south of that area, for the communities of Mountain Home Village and Forest Falls. Those communities remain under an evacuation warning and only residents with ID can access the area.
Report a correction or typo
Related topics:
yucaipasan bernardino countyfirefighter killedwildfire
Copyright © 2021 KABC-TV. All Rights Reserved.
More Videos
From CNN Newsource affiliates
TOP STORIES