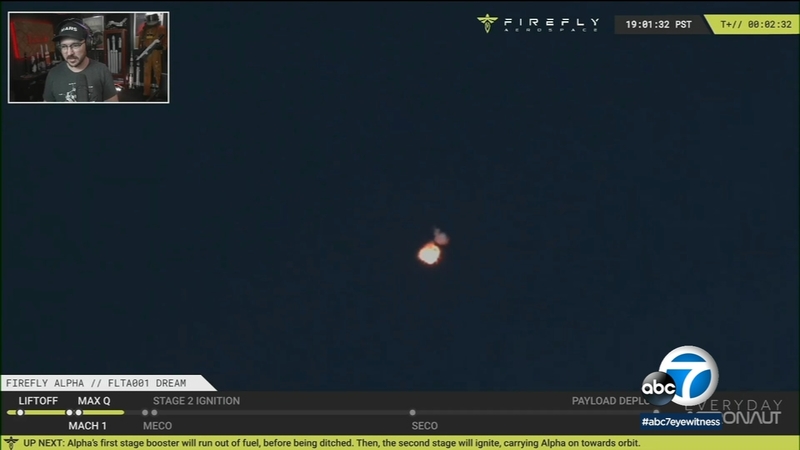 VANDENBERG SPACE FORCE BASE, Calif. (KABC) -- Space company Firefly launched its Alpha rocket from Vandenberg Space Force Base Thursday evening, but it exploded within a few minutes into the flight.

"Alpha experienced an anomaly during first stage ascent that resulted in the loss of the vehicle," the company tweeted. "As we gather more information, additional details will be provided."

After it took off around 7 p.m., the rocket exploded in about three minutes.

Alpha experienced an anomaly during first stage ascent that resulted in the loss of the vehicle. As we gather more information, additional details will be provided.

"Prior to entering the countdown, the Range cleared the pad and all surrounding areas to minimize risk to Firefly employees, base staff, and the general public," the company also tweeted. "We are continuing to work with the Range, following all safety protocols."

It was the first orbital attempt for Texas-based Firefly, which is targeting the growing market for launching small satellites.

The company plans to be capable of launching Alphas twice a month at a starting price of $15 million each.

Tim Dodd, whose goes by Everyday Astronaut on Twitter and has more than 530,000 followers, livestreamed the moment the rocket exploded.