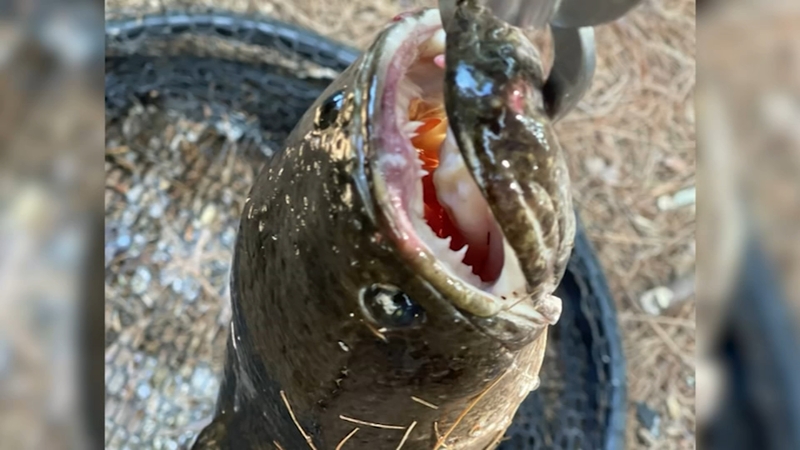 CANTON, MA -- An angler in Massachusetts hauled in a fish covered in slime and sporting a mouth full of fangs.

"Let's be honest here, I'm out here chasing big bass," Mike Powell said in an interview with his local ABC affiliate. "To catch that when I'm not looking for it, I mean I was wearing one of these things that tells you your heart rate, that thing was going through the roof."

Powell was fishing over the weekend when he hooked the nearly 6 pound - 30 inch creature in the Canton's Reservoir Pond.

"I didn't know how to fight it. Cause this thing was jumping left right left right," he recalled.

A 9-foot sturgeon was caught on camera leaping from the Fraser River in Canada.

Eventually he held in his hand a fish he had never seen before.

It turns out, Mike caught a Northern Snakehead fish. It's a species of fish that is not native to Massachusetts, or even the Northeast, or even North America!

The fish is from Asia, and it's actually illegal to have in the United States.

Todd Richards with Massachusetts Wildlife said the fish was most likely in someone's fish tank. But then when it got too big, they released it into the reservoir.

"They are an injurious species federally, so you can't possess them. Mass Wildlife regulates the possession of the fish that can live in our waters and we don't issue permits for snakeheads," Richards said.

WATCH: 100-pound opah fish, also known as a moonfish, discovered on a beach in Oregon

A large colorful fish washed ashore on the Oregon coast last week in what aquarium officials called a rare occurrence.

Prior to Powell's weekend encounter, only three other snakeheads have been documented as being caught in Massachusetts waters since 2002.

"I fish this lake my whole life and when I saw that I was like this doesn't belong here," Powell said.

Richards and other wildlife officials said it needs to stay that way and so far there's good reason to believe it will.

"The good news is these are all adult fish. We have no evidence of reproduction, which would be a different ball game," Richards said.
Report a correction or typo
Related topics:
pets & animalsmassachusettsfishanimalsfishing
Copyright © 2022 KABC Television, LLC. All rights reserved.
TOP STORIES
Police investigating smash-and-grab robbery at OC jewelry store
Over 100 shots fired in Inglewood ambush that killed 4, neighbor says
Wild Wall Street: Up-and-down day reflects market uncertainty
CA students must get COVID-19 vaccine under new proposed bill
Rams ban ticket sales to 49ers fans in Bay area
Super Bowl Experience jam packed with games for fans of all ages
Growing the American dream in new ABC drama 'Promised Land'
Show More
Koreatown service dog is dead after being attacked by two pit bulls
Tax changes you should know about before filing this year
Cause of death revealed for 23-year-old woman found dead after date
Dad charged and fired from job after racist tirade posted on TikTok
Woman killed in 'targeted ambush' at her birthday party in Inglewood
More TOP STORIES News