Fontana warehouse project to move forward after lawsuit, but with environmentally friendly features 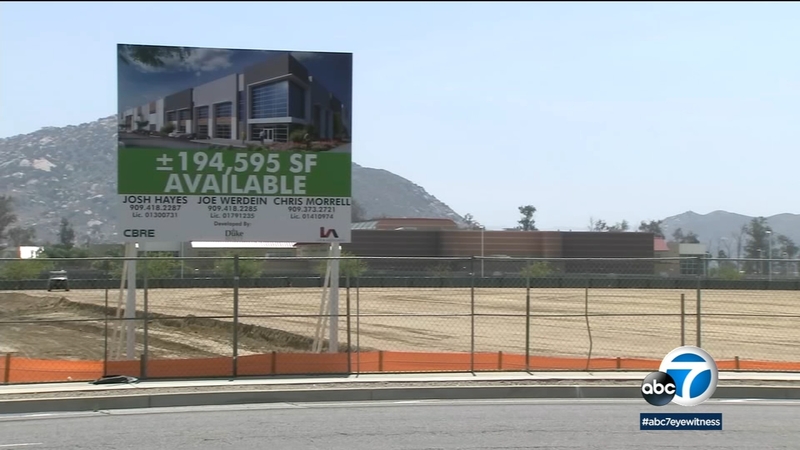 FONTANA, Calif. (KABC) -- A group of Fontana residents was not able to stop a 200,000 square-foot warehouse from moving forward in their neighborhood -- but they were able to claim victory by securing several compromises from the developer in a recent settlement approved by a San Bernardino County Superior Court judge.

"Although we are saddened the warehouse in the settlement will move forward, being built less than 100 feet from a high school, we are encouraged by the results that have come from this courageous and just lawsuit," Fontana resident Liz Sena Monday at a news conference in downtown Los Angeles.

The project is being developed by Duke Realty Corporation on the corner of Slover and Oleander in the city of Fontana, and will include approximately 200,000 square feet of warehouse space. One of residents primary concerns was the proximity of Jurupa Hills High School, which is right along the project's southern boundary line.

In the Inland Empire communities of Chino and Ontario, decades ago there was farmland as far as the eye could see. But in recent years, many of those farms have been gobbled up by warehouses and the rapidly expanding logistics industry.

As part of the settlement, the developer will be required to install solar panels across the entire roof of the warehouse, as well as ensure that all on-site fork lifts and yard trucks be zero emission.

They're also providing $50,000 to allow Jurupa Hills High School officials to enhance landscaping along the northern boundary line, and they're providing $140,000 to the city of Fontana to provide high quality air filters for surrounding residents.

As part of the settlement, the city of Fontana also enacted what officials call the Industrial Commerce Center Sustainability Standards Ordinance to strengthen environmental standards for all future industrial commerce centers in the city.

"We are in agreement with Attorney General Bonta -- this ordinance should serve as a model for other local governments across the State," said Fontana Mayor Acquanetta Warren. "We are proud to be leading the way once again."