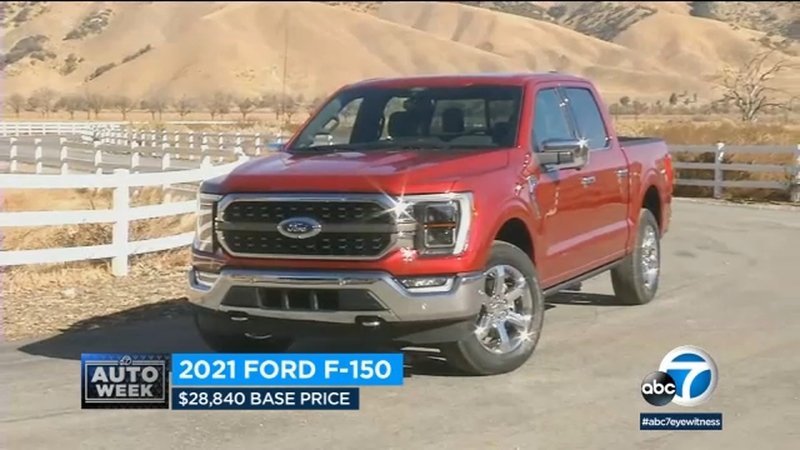 The best-selling vehicle in the U.S. isn't a four-door sedan, nor even a crossover SUV. It's a pickup truck, the Ford F-Series.

"You know we've been the top-selling truck for 43 years, and we're the best-selling vehicle overall," said Brian Bell of Ford Motor Company.

Now, an all-new F-150 for 2021, and it should remain the king of the sales charts, with a starting price of $28,840 for a fairly bare-bones example. The big news with the previous redesign was the aluminum body, and that continues.

But for this example, which is more than ready for the future, there's lots of new tech. Leading the way is on-board power, especially with the new hybrid model, which can provide up to 7.2 kilowatts of power via outlets in the bed. For personal use, help for those tailgate parties and camping trips. And for those on the job, the ability to run power tools without need for a portable generator.

The rest of the truck gets the job done the old fashioned way, as a truck is expected to do. Lots of carrying capacity, towing capacity, and new fuel savings with the hybrid version called F-150 PowerBoost. And, this truck will eventually bring a pure electric pickup future to Ford.

"We have announced to the world that we're bringing an electric F-150 to market, and that's still moving forward, we're excited about that," noted Bell.

There are basically two kinds of full-size pickup trucks. There are those base models that you see being used by contractors and in large fleets, and then there are the more loaded-up ones that a family might have as both a commuter vehicle and for weekend fun.

Actually, there's a third kind of full-size truck. The off-road "super truck," which Ford brought to market with the Raptor, through two generations. It really hasn't had any direct competition. Until now.

Just now rolling into dealerships is Ram's answer to the Raptor, the TRX. Bad to the bone, as the song goes, in pretty much every way. And it checkmates the most recent Raptor in many ways. (The Raptor is on a hiatus while the new F-150 is being launched.) The Ford had a twin-turbo V6; the Ram has a supercharged V8. The Ford most recently made 450 horsepower, the Ram offers a staggering 702. Add in a sophisticated off-road suspension system, and accessories galore, and this would seem to be the new king of super off-road trucks. It also costs nearly $72,000 before options.

Maybe the TRX only has the advantage for now. Rumors about that the next-generation Ford Raptor will see a return to V8 power, be supercharged, and possibly out-power the new Ram. For now, Ford is being tight-lipped about the third-generation Raptor, except to say there will be one.

"We don't have any news on Raptor today, other than to tell you there's a new one coming," said Bell.