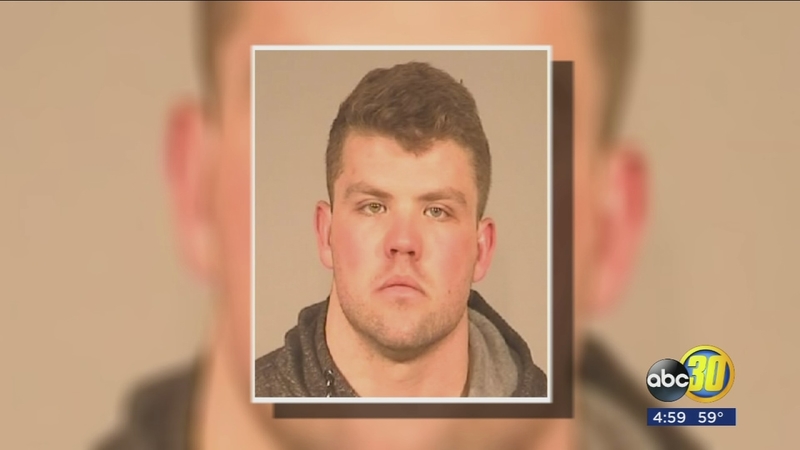 FRESNO, Calif. -- At a police briefing Sunday, officers were told about a pedestrian killed while crossing Herndon near Millbrook. The driver left the scene, but evidence left behind raised an eyebrow for one Fresno police officer.

33-year-old Kong Yang was standing in the street early Sunday morning, likely walking across the road, when Fresno police say he was struck and killed.

No one knew he was dead until hours later when a passerby alerted officers of his body in the bushes.

Fresno Police Chief Jerry Dyer said, "We don't know what his alcohol level was, but we do know he was in the roadway when he was struck in and not in a crosswalk. Which would generally make the primary collision factor pedestrian-caused. But still, Cody Sanders has a responsibility to stop and he didn't."

Detectives were led to Sanders in a very unusual way. Hours after the crime, officers beginning their shift were told about the hit-and-run, including specific details about the wanted car and driver.

"After the briefing, the officer called his brother and asked him if he had been involved in a collision the night before, and his brother said he was driving home from work. He's a security guard at Club Imperio and he was driving westbound in the number one lane and that he had hit something that he thought was either a dog or a sign."

The suspect called his girlfriend and said he went back to the area and did not see anything unusual at the scene, so he left -- until his brother's conscience prompted him to do the right thing.

Investigators are not sure if Sanders and the victim crossed paths at the nightclub they were both at earlier in the evening, but they are reviewing surveillance video from the club.