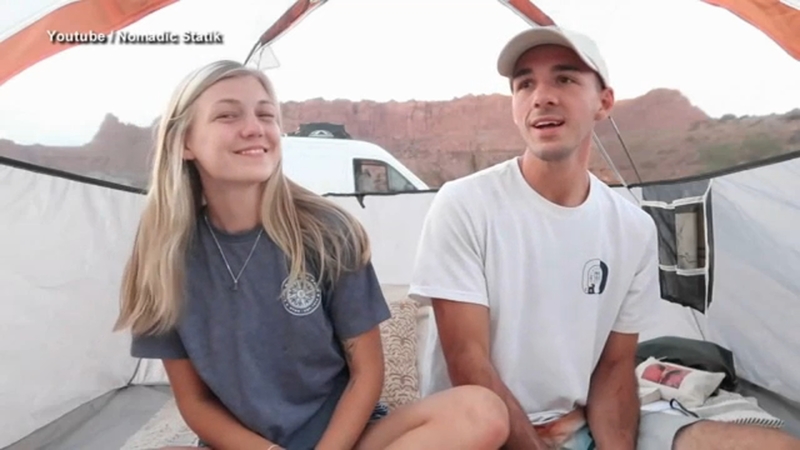 On Aug. 12, police had an encounter with Petito and Laundrie which was caught on police body camera, and the pair was described as having "engaged in some sort of altercation," according to a report released by the Moab City Police Department.

Officers were called to reports of disorderly conduct and encountered Laundrie and Petito, along with a witness whose full name was redacted from the report. The incident occurred just several weeks before Petito was reported missing by her family.

Authorities have now released audio of the full 2-minute and 30-second call. Click here for the latest details on the investigation.

Read the full transcript of the call below:

Caller: Yeah. Hi, I'm calling. I'm right on the corner of Main Street by moonflower. And we're driving by and I'd like to report a domestic dispute to Florida with a white that Florida license plate. White Van, gentlemen. 5'6 Beard.

Dispatcher: Where's it at?

Caller: They just drove off. They're going down Main Street. They made a right onto Main Street off Moonflower

Dispatcher: Or what were they doing?

Caller: But what do you say?

Dispatcher: What were they doing?

Caller: We drove by them. A gentleman was slapping the girl

Dispatcher: He was slapping her?

Caller: Yes. And then we stopped. They ran up and down the sidewalk. He proceeded to hit her, hops in the car. And they drove off

Dispatcher: You say that was a white van?

Caller: White van, I can give you the the license plate if you give me one sec.

Dispatcher: What kind of white van, like a big one?

Dispatcher: White Ford Transit. Okay, what's your name? (Long pause) And where did they? So they turned. They headed south on Main Street from Moonflower Market?

caller: Correct. They made the right turn.

Dispatcher: So they went north.

Dispatcher: Okay. So you're right there by the post office.

Caller: right across the street. Yep.

Dispatcher Okay. And when they turned on to Main Street, they went right or left?