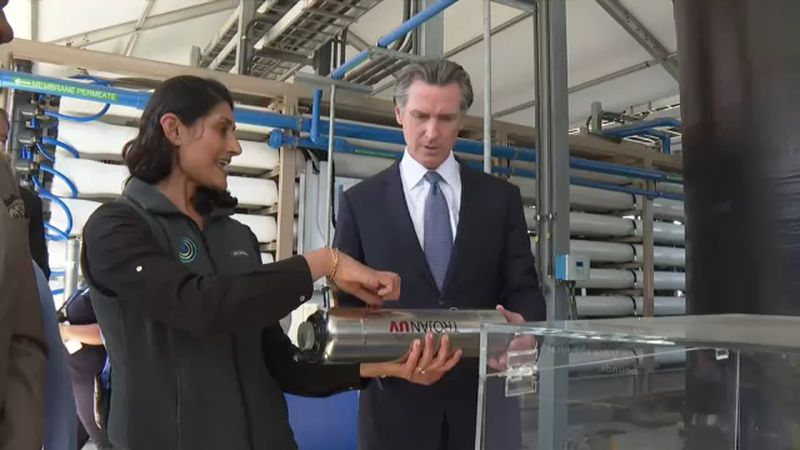 Newsom pushes water conservation: 'We have to do things differently'

CARSON, Calif. (KABC) -- Gov. Gavin Newsom is urging Californians to find ways to reduce their water use in an effort to combat the historic drought and said upcoming conservation mandates are a priority.

It was originally built as a demonstration project to recycle household wastewater and replenish groundwater supplies.

California saw its driest conditions in the first three months of 2022.

The state's water use jumped dramatically in March, state officials said last week, as one of the driest stretches on record prompted a wave of homeowners to start watering their lawns earlier than usual in defiance of Newsom's pleas for conservation.

Californians averaged 77 gallons per person per day in March, an 18.9% increase from March 2020. It's the most water Californians have used in March since the middle of the previous drought in 2015.

Statewide, water consumption is up just 3.7% since July compared to 2020, woefully short of Newsom's 15% goal.
Newsom pledged to spend $100 million on a statewide advertising campaign to encourage water conservation.

The campaign will include traditional radio and television spots while also paying people with large followings on social media to urge others to save water.

He also promised to spend a $211 million to conserve more water in state government buildings by replacing plumbing fixtures and irrigation controls.

The alarm is being sounded over California's water supply. Major restrictions are set to go into effect, a desperate attempt to offset the state's water emergency. Marc Brown has everything you need to know about this unprecedented crisis, on Eyewitness Newsmakers.