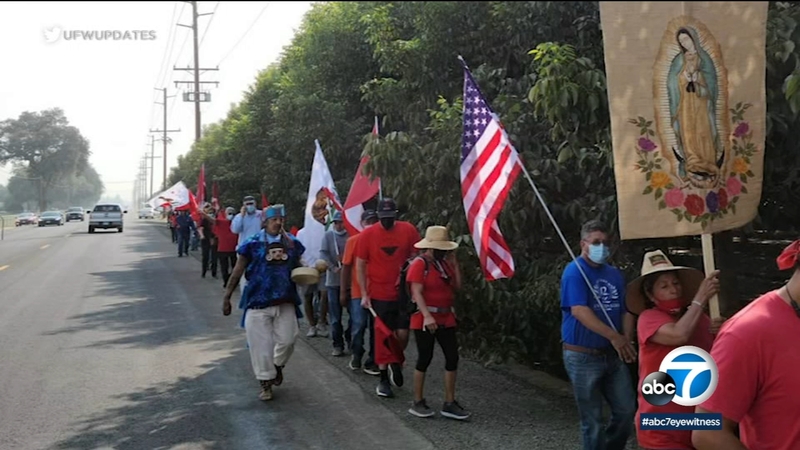 SACRAMENTO, Calif. (KABC) -- Gov. Gavin Newsom Wednesday vetoed a bill that would have allowed farmworkers to vote by mail in union elections, a move met by criticism and protest from the United Farm Workers union.

"Just one day into farm workers' march for Gov. @GavinNewsom's signature, he has vetoed #AB616," a tweet from UFW's account said Wednesday. "Workers are now marching towards the French Laundry, hoping to finally meet with the Governor."

Just one day into farm workers’ march for Gov. @GavinNewsom’s signature, he has vetoed #AB616.

Workers are now marching towards the French Laundry, hoping to finally meet with the Governor. pic.twitter.com/PrWsNPhlnb

UFW members had organized a 260-mile march this week from Tulare County to Sacramento in support of the bill. The union added it has tried to meet with the governor since early June to discuss the bill.

Union members plan to march more than five miles Saturday from Napa's PlumpJack Winery, a winery founded by Newsom, to the French Laundry restaurant in Yountville to request a meeting, according to a UFW statement.

Newsom was criticized for dining at the French Laundry with lobbyists at the same time he urged Californians to avoid groups and indoor settings during the pandemic.

The union criticized Newsom's veto, saying it shows a double standard since Californians are allowed to vote by mail, such as in the recall election held earlier this month.