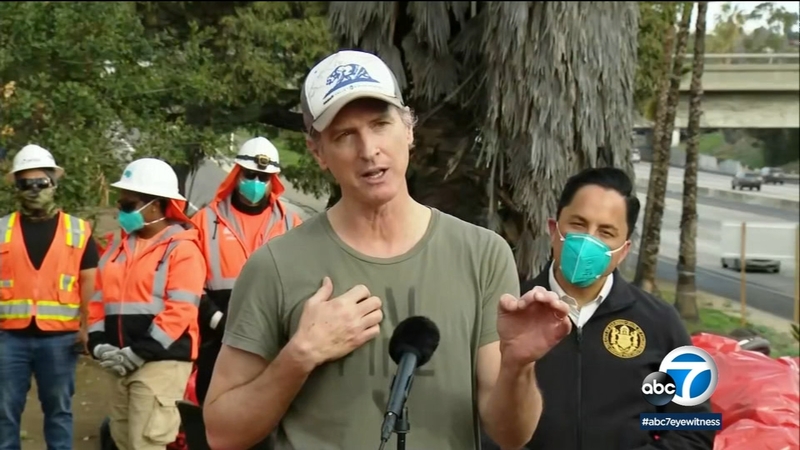 "This past year, California has been able to move 58,000 individuals off our streets and into the housing and treatment they desperately needed,'' Newsom said. "The California Blueprint will double down on those efforts, focusing on clearing encampments, while also setting the groundwork for long-term systemic change with significant investments in mental health and substance abuse treatment to get vulnerable people off the streets.''

The proposed additional $2 billion package -- for a total of $14 billion -- to the state's multi-year plan to confront the homelessness crisis is intended to create 55,000 new housing units and treatment slots when fully implemented.

"We have to do more and we have to do better,'' said Newsom, who was joined by San Diego Mayor Todd Gloria.

In the short term, he said, plans are to spend about $2 billion on "immediate and short-term'' solutions that include "rapid rehousing'' strategies.

The California Blueprint is intended to bolster last year's investments with an additional $1.5 billion for behavioral health bridge housing to get people off the street and into treatment, and $500 million toward "encampment resolution grants for local jurisdictions to implement short- and long-term rehousing strategies for people experiencing homelessness in encampments around the state,'' a statement from the governor's office read.

Months after the city cleared out homeless encampments from the Venice boardwalk, neighbors are seeing new tents pop up along the sidewalks and on the beach.

"Behavioral health and homelessness are inextricably linked, and we have the chance to invest in the former to help prevent the latter,'' state Health and Human Services Secretary Dr. Mark Ghaly said. "Governor Newsom's proposal will help expand access to housing and medical support for vulnerable populations with complex behavioral health conditions and people living in encampments.''

The governor said he understands taxpayer frustration at the homelessness crisis, but asked for patience. He said many people on the streets deal with addiction, and they will not be admitted to shelters unless they are sober, creating a difficult-to-solve issue through the old shelter system.

Gloria, meanwhile, said that at this time last year, around 1,100 shelter beds existed in the city. Now there are more than 1,300, a number he said will continue to grow in tandem with the acquisition of hotel rooms through state and federal funding.

"That means more people on their way to permanent housing, ending this nightmare,'' Gloria said. "I thank (Newsom) for coming to San Diego today to highlight our program to reach out to residents living alongside our freeways and connect them to the safety of our shelters and the help they need to end their homelessness.''

The governor also spoke briefly about the state's response to COVID-19. He said California has 31% of the nation's COVID-19 testing sites and has per-capita case, hospitalization and death rates far below those of similarly large states.