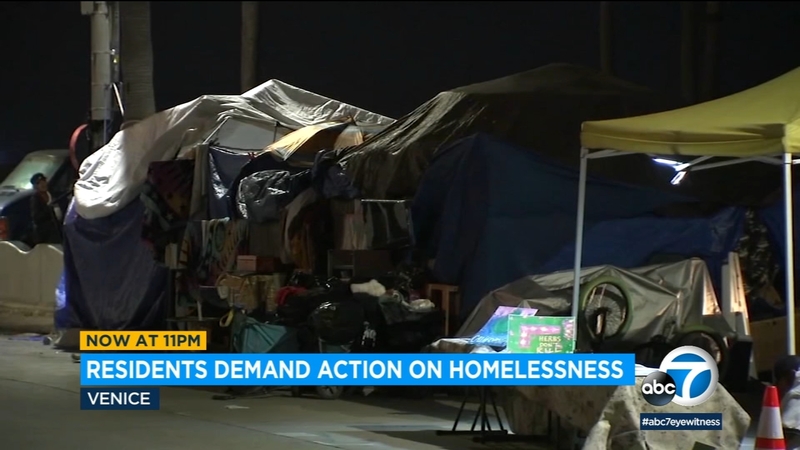 VENICE, LOS ANGELES (KABC) -- They're back. Months after the city cleared out homeless encampments from the Venice boardwalk, neighbors are seeing new tents pop up along the sidewalks and on the beach.

Just last summer, hundreds of unhoused people and their tents were removed from large encampments along the Venice boardwalk and moved to supportive housing.

Now frustrated residents say they feel they're back to square one. They say homeless encampments have spread throughout the community and many don't feel safe.

"It's almost beyond frustration. It's comical," said resident Dave Turner. "The mismanagement of it has not served anyone well."

Turner says residents have not received enough help from the city officials.

Los Angeles City Councilman Mike Bonin, who represents Venice, has faced backlash over his handling of the homeless crisis. Critics accuse the councilman of inaction that they say has led to a growing homeless population in their neighborhoods.

In August, as part of a program spearheaded by Bonin's office, more than 200 unhoused people living in a large encampment on the boardwalk were moved into housing.

But residents say many of the homeless did not leave.

"They cleaned up the immediate boardwalk right here so people can claim victory but there's people out in the sand, there's people three blocks away and now it's repopulating everywhere," Turner said.

Before last year's cleanup, residents said fights, fires and even shootings were happening at the encampments.

Residents say they are still dealing with crime and other problems. They say there are still a large number of people, some of them violent, living on the streets and on the beach.

They say the city needs to provide more housing and services. Meanwhile, some say their complaints are being ignored by city officials.

"Start listening to all of us residents that are living here that are screaming for help," said Brennan Lindner.

Eyewitness News reached out to Bonin's office for comment but has not heard back.