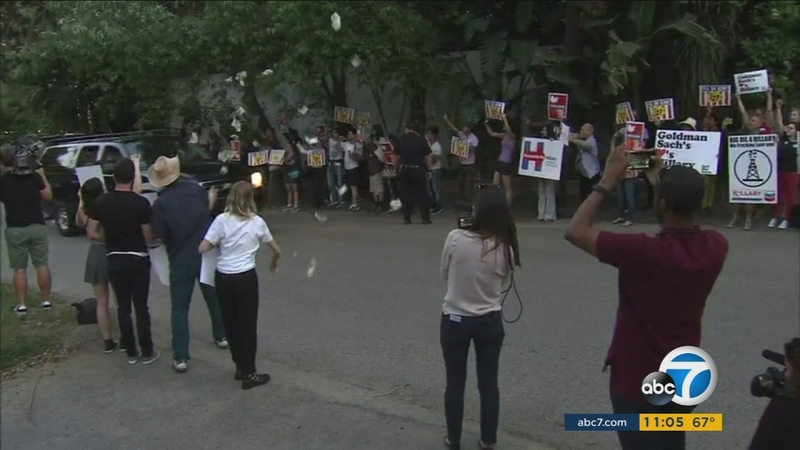 The move was an apparent jab at Clinton's perceived close relationship with Wall Street.

"When I think about the amount of money being raised at this fundraiser, the smallest ticket is $34,000 a plate. Even minimum-wage workers making $15 an hour would not even hit that," said Francis Fisher, a Sanders supporter.

Sanders got his own star support as those "feeling the Bern" celebrate his growing popularity and criticize Clinton's top-dollar events.

About 100 of his supporters held a smaller-scale event designed to contrast the two candidates' fundraising philosophies. Sanders supporters were asked to contribute just $27 per person, the average donation to the Vermont senator's grassroots campaign.

"What's happening up the hill is just emblematic of a group of people that are just out of touch with what's really going on in this country," said Jay Ponti, who organized the Sanders event.

Clooney was spotted Friday night at Clinton's big-money fundraiser at the San Francisco home of a venture capitalist. Saturday night's event at Clooney's Studio City home was even bigger, with some guests pledging more than $300,000 to support the former secretary of state. Co-hosts included Jeffrey and Marilyn Katzenberg, Steven Spielberg and Kate Capshaw and Haim and Cheryl Saban.

Money was the focus at a Saturday morning rally at Southwest College in South Los Angeles.

The former first lady told the cheering crowd that if elected she would push to raise the federal minimum wage, praising the golden state for enacting the highest minimum wage in the nation.

"Let's take California values and New York values and put them to work for American values," she said.

Back in celebrity-filled Fryman Canyon, actress Lea Thompson posted her support of both Democratic presidential candidates and her preference.

"I've always admired her. She's got a lot of strength. I could never, you know, this makes me nervous. I could never do what she does, and I think she's kind of amazing," Thompson said.

This year's extended primary season could be the first time in many elections that the California nomination in June could make a difference. A recent poll showed a still-tight race, with Clinton ahead by just six points in California. It also showed that 12 percent of those polled are still undecided.