2 years after the death of George Floyd, what has changed? Where do we go now?

On Wednesday, the intersection in Minneapolis where Floyd died was renamed in his honor.
KABC
By Carlos Granda 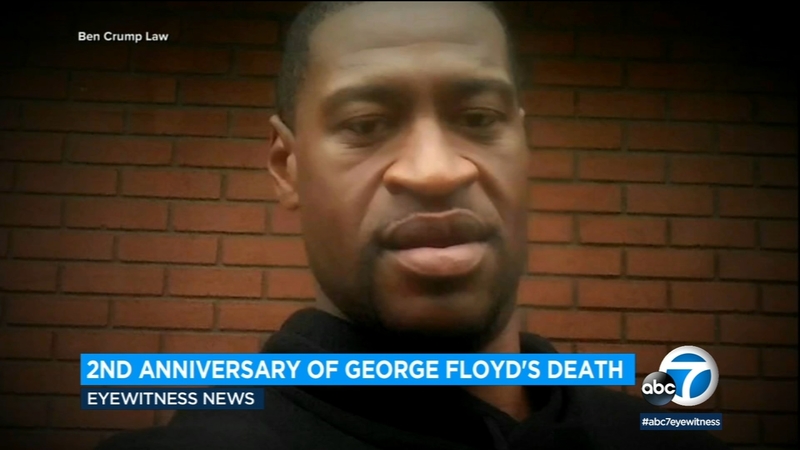 2 years after the death of George Floyd, what has changed?

MINNEAPOLIS (KABC) -- It's the image that no one can forget.

In the video seen around the world, former Minneapolis police officer Derek Chauvin was spotted kneeling on the neck of George Floyd for more than nine minutes.

Floyd is seen desperately pleading to let him breathe before he loses consciousness and dies.

Floyd's death sparked outrage and protests around the world. It led to an international movement about the way police treat suspects.

On Wednesday, the intersection in Minneapolis where Floyd died was renamed in his honor.

Floyd's brother Terrence was among family members to attend as a commemorative street sign marked the corner of 38th Street and Chicago Avenue as "George Perry Floyd Square" on the two-year anniversary of his death.

Many stopped by to honor Floyd.

"We need to make sure that our police departments are held accountable for their actions," said another visitor.

All four officers involved in the incident were fired and charged after Floyd's death.

The question remains: What has changed since then?

Looking at the numbers up to 2020, we see that Black Californians were four times more likely than other races and ethnicities to be injured or killed during law enforcement use-of-force incidents.

The total number of incidents remained constant between 2016 and 2020.

The latest data shows the average number of fatal law enforcement shootings in California has gone down a bit from 12.3 in 2020 to 10.3 so far this year.

"It's a measure of what we can do together to heal the very soul of this nation to address profound fear and trauma exhaustion particularly Black Americans have experienced for generations," he said.

NAACP President Derrick Johnson issued a statement that reads in part, "... the timing of this announcement with the anniversary of George Floyd's murder is a reminder that policing in America is uneven when it intersects with Black America. The Executive Order is a good step forward."