LAPD Chief Michel Moore said disciplinary action will be taken if a member of the department is found to be behind the reported image of George Floyd.
KABC 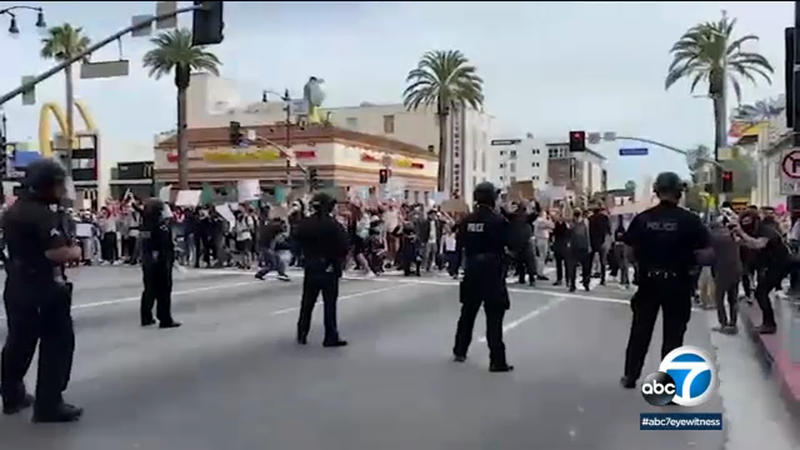 LOS ANGELES (KABC) -- Los Angeles Police Department Chief Michel Moore spoke out Tuesday about an alleged Valentine's Day-style image mocking the death of George Floyd circulated among the agency's officers, which has sparked both outrage and an investigation.

The investigation centers on a purported photo showing an image of Floyd and the words "You take my breath away."

Moore says he reached out to his command staff to look for any postings or printouts of the message after an officer reported its existence.

"We found no postings anywhere in the city at any of our facilities and yesterday's interview was followed up by an interview today of the individual who actually stepped forward and identified the existence of this image," Moore said. "I don't have the results of that interview yet."

There is growing outrage over a reported Valentine's day message circulating among LAPD officers that mocked the death of George Floyd.

Moore added that authorities are trying to track down who had the offensive message and where they got it.

Over the weekend, an LAPD employee reported seeing the image, told his superiors, and was interviewed by the department Monday. But, the LAPD tells Eyewitness News that they have not seen the image, even after a workplace survey was conducted. In a statement, the department said they have "zero tolerance" for this type of behavior.

Moore said disciplinary action will be taken if an LAPD member is found to be behind the reported image.

"I have no temperament or patience or allowance for them to remain in this organization," Moore said.

Moore says the Office of the Inspector General is monitoring the investigation to make sure it is thorough and complete.
The report of the image also outraged the district attorney, the police union, community groups and George Floyd's family.

Ben Crump, the attorney for the Floyd family, issued a statement Monday, saying:

"The Floyd family is understandably outraged. This is beyond insult on top of injury - it's injury on top of death. The type of callousness and cruelty within a person's soul needed to do something like this evades comprehension - and is indicative of a much larger problem within the culture of the LAPD."

George Floyd died last May after a Minneapolis police officer pressed a knee on his neck as Floyd said, "I can't breathe."

His death sparked protests across the country.