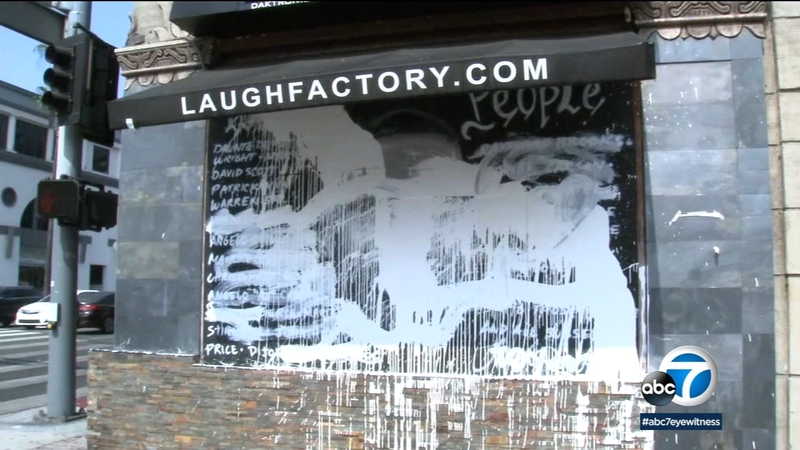 HOLLYWOOD, LOS ANGELES (KABC) -- A mural honoring George Floyd was vandalized outside the Laugh Factory in Hollywood, prompting reactions from activists and the comedy club's employees, and an investigation by the Los Angeles Police Department.

A vandal apparently tossed white paint onto the mural, which is located on an exterior wall outside the venue in the 8000 block of Sunset Boulevard.

Asked to describe what she thought the vandalism represented, activist Shannon Morton replied: "Hatred -- and I think the world is so full of hatred. And it makes me very sad, because this place -- especially on this corner, and what the Laugh Factory and Black Women Lead have tried to do is cultivate a space of love and unity. And when I see blatant hatred like this, it makes me sad for our community."

Laugh Factory officials said it was at least the fifth time vandals have tried to destroy the mural, with the most recent incident being the worst.

"It makes me sad," said Enrique Salazar, a spokesperson for the comedy club. "There's so much hatred still in the world. And this wasn't disrupting anybody, this wasn't causing any violence or issue, it was just making -- bringing awareness. And especially right in front of a place that brings happiness and laughter and joy, and our mission is just to bring joy and unity through laughter."

The Los Angeles police officer who shared a photo of George Floyd with the words "you take my breath away" in a Valentine-like format has been cleared of wrongdoing and will not face any punishment.

The mural, which was unveiled last year, depicts Floyd's face along with the names of other people who have been killed by police.

The LAPD is investigating the incident. No description of a suspect has been released.