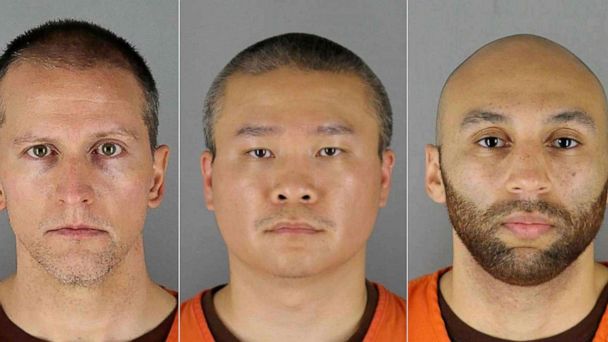 The four fired Minneapolis police officers criminally charged in the death of George Floyd appeared before a judge on Monday for a brief pre-trial hearing that was also attended by Floyd's aunt and uncle, who sat in the front row.


Judge Peter Cahill instructed both prosecutors and defense attorneys to limit pre-trial publicity about the case.

Thao's attorney, Robert Paule, said in court that he is considering a motion for change of venue due to what he described as prejudicial pre-trial publicity. He noted that public comments already made about the case by President Donald Trump, Minnesota Gov. Tim Walz, the Hennepin County attorney's office, Minneapolis Police Chief Medaria Arradondo and Mayor Jacob Frey could jeopardize a fair trial in Hennepin County.

"We are just as interested in a fair trial," said Assistant Minnesota Attorney General Matthew Frank.

While Cahill stopped short of issuing a gag order, he warned he could do so if his instructions were not followed.

On Friday, Cahill barred news cameras and audio equipment during pre-trial proceedings after expressing worries that publicity could taint the pool of potential jurors. He said he has yet to decide on whether to allow news cameras in the courtroom during the actual trial.

Chauvin, who remains in custody, appeared in court via video. Thao, who is also in custody, was physically in the courtroom, but stood inside a phone-booth-like wooden cubicle during the hearing.

Kueng and Lane, who have been released on bail, were both in the courtroom for the proceedings.

None of the former officers has yet entered a plea. But court documents show Kueng intends to plead not guilty and will argue self-defense.

Frank informed the court that prosecutors have compiled about 8,000 pages of discovery material in the case.

Cahill set the defendants' next court appearance for Sept. 11 and tentatively scheduled a trial date for March 8, 2021. He asked Chauvin if it would be OK with him to extend the timeline for those dates given the voluminous amount of discovery evidence.

"Yes, your honor," answered Chauvin in the only statement he made at the hearing.

Cahill has yet to decide if the men will be tried separately or together.

Floyd, a Black man, was arrested on May 25 outside a convenience store in Minneapolis and accused of using counterfeit money to purchase cigarettes, according to police.


During the arrests, Chauvin, a 44-year-old white police officer, dug his knee into the back of Floyd's neck. Floyd repeatedly called out, "I can't breathe," before he lost consciousness, according to a criminal complaint. Floyd was taken to a hospital, where he was pronounced dead.

The arrest was captured on citizen cellphone video that was posted on Facebook and went viral, sparking protests and violence in Minneapolis and across the nation. The episode has also become a rallying cry against police brutality and the defunding of law enforcement agencies.

Floyd's death followed a long string of police-involved killings of Black people in the United States.

The four officers involved in Floyd's fatal arrest were fired from the police department. Two of the officers, Lane and Kueng, were rookies.

In the courtroom on Monday were two members of Floyd's family, his aunt, Angela Harrelson, and his uncle, Selwyn Jones. At one point, Cahill admonished Floyd's relatives for reacting from the gallery during the hearing.

Outside the courthouse, Jones described the emotions he felt during the hearing, saying, "Absolutely crazy that I sat six feet away from the person who murdered my nephew."
Report a correction or typo
Related topics:
abc newsnational
Copyright © 2020 ABC News Internet Ventures.
More Videos
From CNN Newsource affiliates
TOP STORIES