Gascón backs handling of El Monte shooting suspect case, saying he had 'no history of violence'

Gascón insisted a plea agreement that allowed the suspect to avoid jail time was "appropriate under the circumstances.''
KABC
By Josh Haskell 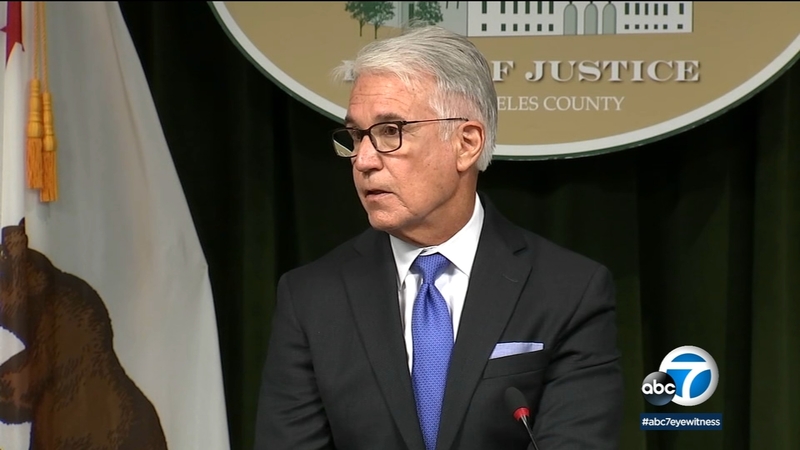 LOS ANGELES (KABC) -- District Attorney George Gascón, who has come under fire over the disposition of a 2021 criminal case against a man who fatally shot two El Monte police officers last week, defended his office's handling of the matter Tuesday, saying the suspect had no history of violence before the shooting and insisted a plea agreement that allowed the man to avoid jail time was "appropriate under the circumstances.''

"He was basically someone who had been drug addicted for many years," said Gascón during a news conference.

As the investigation continues, critics of Gascón have loudly lashed out at the district attorney, noting that the suspect, Justin Flores -- a felon with a history of arrests -- was given a plea deal last year that allowed him to avoid prison time for being in possession of a firearm.

As a result of the plea, charges of methamphetamine possession and being a felon in possession of ammunition were dropped, and Flores was placed on two years' probation, and 20 days in jail.

"The outcome in this particular case, given what we knew then, no history of violence, very little contact with the criminal justice system for nearly 10 years, was appropriate," said Gascón.

Officer Joseph Santana and Cpl. Michael Paredes were killed during a gunfight at the Siesta Inn. Authorities said the officers confronted Flores in a room at the motel, leading to gunfire.

Both officers were ultimately shot to death and Flores died at the scene of a self-inflicted gunshot, according to authorities.

"I recognize these are difficult times, and they're difficult for different reasons," said Gascón. "Understandably, many of us are angry, including myself. We all wish that we could predict violence, but the reality is that we can't."

Last week, Santana's mother lashed out at Gascón, saying his "insane ideas'' allowed the gunman to remain out of jail and free to murder her son.

Gascón asked the public to be patient with the county's "imperfect system" and noted a lack of resources for those with a criminal record, such as transitional and trauma recovery services along with employment and housing assistance.

"I know that this is frustrating to hear, and it may not help heal the wounds for some, but we do not serve our community when we try to pretend that we can predict 100% of the time when these cases are going to occur," said Gascón.

Meanwhile, Deputy District Attorney Jon Hatami, a leader of a petition drive to recall Gascón, also blasted the plea deal, saying it was an example of Gascón's policies against alleging prior strike convictions in criminal cases, allowing defendants to avoid prison time and remain on the streets.

"When George Gascón implemented his blanket policies, he didn't care about prior violent criminal history, the law, evidence, facts or public safety,'' Hatami wrote on his Twitter page. "He excluded all strike priors on past & future cases no matter what. His excuses now are just not true.''

"... The reality is that when you have the history that this individual had, the outcome was appropriate under the circumstances,'' he said.

Both officers lived in Upland but were raised in El Monte, and both were married fathers with children.

Paredes began as an EMPD cadet and was sworn in as a full-time police officer in July 2000, city officials said. He is survived by his wife of 18 years, a 16-year-old daughter and a 14-year-old son.

Santana spent six years working for the city's Public Works Department, then worked for three years as a San Bernardino County sheriff's deputy. He joined the El Monte Police Department last year. He is survived by his wife of seven years, a 9-year-old daughter and 2-year-old twin boys.