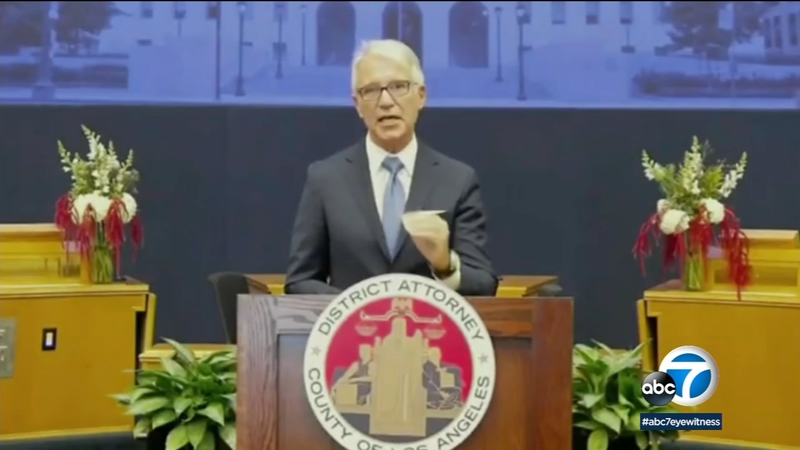 "We will be the largest office in the nation to eliminate cash bail," said Gascón.

The DA's office will no longer seek cash bail for any misdemeanor, non-serious or non-violent offense, he said.

Bail can be requested in a small subset of cases until Jan. 1. By then Gascón's office said it will eliminate bail altogether.

As promised during his campaign, the death penalty will now be off the table.

"Not just off the table going forward. I am committed to re-sentencing those currently on death row to life in prison," he said.

Kids will not be transferred to adult court, said the new DA.

He announced his office will not seek enhancements of any kind, like gang enhancements and three strikes - a retroactive policy triggering the review of more than 20,000 cases, according to Gascón.

"California's mass incarceration can be tied directly to enhancements and the extreme sentencing laws of the 1990s," he said. "Anyone serving a sentence including an enhancement, or three strikes allegation, will be eligible for reconsideration."
The office will not require victims to testify in order to receive services, and will expand them to the families of those killed by police.

A new use-of-force review board will examine cases dating back to at least 2012.

The former San Francisco district attorney also said the Conviction Integrity Unit will drastically expand its eligibility criteria so that all non-frivolous claims of innocence and wrongful conviction will be reviewed.

Gascón said his office would focus on diversion, and will stop charging some low-level, first-time offenses associated with poverty, addiction, mental illness, and homelessness; instead, diverting individuals into behavioral health services.

"We simply cannot continue to apply criminal justice solutions to what is a public health problem."

However, critics don't see the changes as progressive.

"He's not gonna be prosecuting low-level crimes - drunk in public, petty thefts - things like that are probably going to get washed," said attorney Lou Shapiro. "The question is, will the low-level offenders feel more empowered to commit those crimes? Will that affect the residents of Los Angeles County? And it very well might, it's just an experiment."