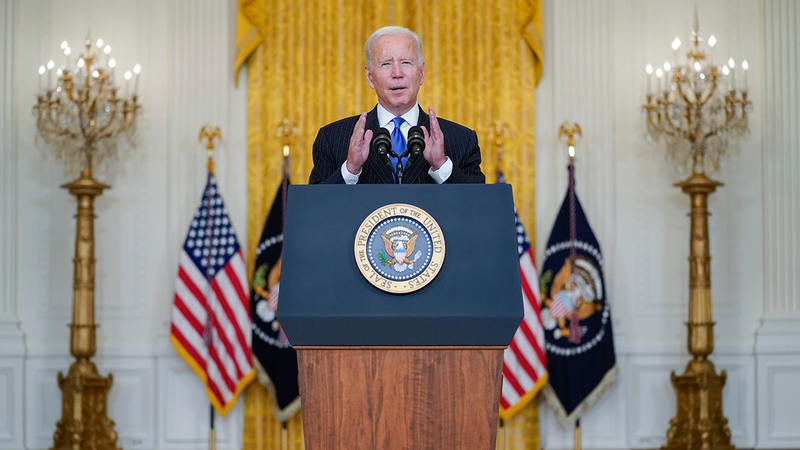 That's a 30% increase from before the pandemic, when the industry already faced a labor shortage of 61,500 drivers.

"That's a pretty big spike," Spear added. Many drivers are retiring, dropping out of the industry. Increased consumer demand, prompting a need for more drivers, also plays a big role in the shortfall.

This comes at a time when US ports are backlogged -- primarily because there are few trucks and drivers to pick up cargo -- creating a supply chain slowdown. President Biden directed the Ports of Los Angeles and Long Beach to move to 24/7 operations. However, the ports can't yet work round the clock because importers don't have enough drivers to move their cargo at all hours.

"24/7 operations - it's an improvement," said Spear. "But it doesn't matter if it's a port in LA or Long Beach, or the last mile of delivery from a train to a warehouse in Wichita. You're going to have to have a driver and a truck move that freight."

Truck drivers move 71% of the US economy's goods, but represent just 4% of the vehicles on the roads, said Spear. If nothing is done, the latest figures put the industry on track for a shortage of 160,000 drivers by 2030, and the need for 1,000,000 new drivers over the next ten years, according to the American Trucking Association.

The bipartisan infrastructure bill awaiting action in Congress would authorize hundreds of billions of dollars for transportation, which would include workforce development for the trucking industry. That would allow 3,000 drivers between the ages of 18-20 to undergoing training, permitting them to drive tractor-trailers across state lines. Currently, drivers must be 21 to do so.

Spear believes younger drivers are the key answer to the labor shortage.

"I think that clearly is the most impactful thing that could be done right now to alleviate this problem. So next year, [we] are not going to be having this conversation because it will alleviate itself because we're investing," said Spear.