Gov. Gavin Newsom on homelessness: 'I don't deserve patience because people don't have it'

The governor sat down with ABC7 to talk about what the state is doing for college students and the response to the pandemic.
KABC
By Josh Haskell 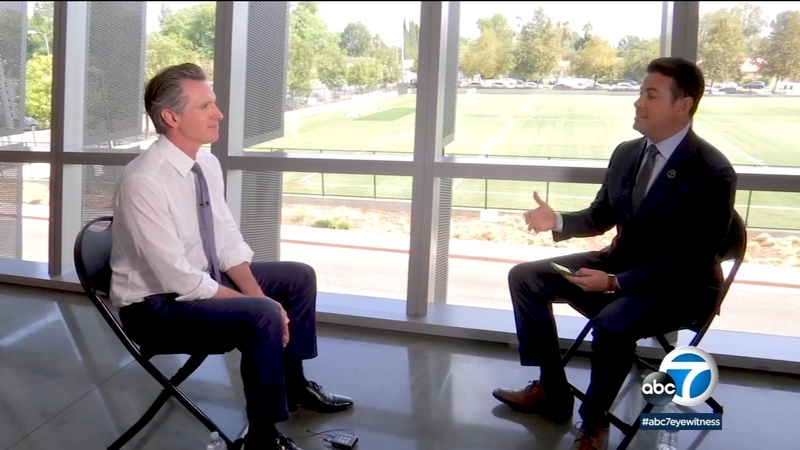 Newsom says there's no time for patience when tackling homelessness

The state is offering $47.1 billion to make college more affordable.

"People quite literally who come to California understand this remarkable three-legged stool - community colleges, CSU and the UCs, - The problem is we haven't invested in that system like we invested in the '60s and '70s," said Newsom.

Newsom sat down with Eyewitness News to talk about what the state is doing for college students, the response to the pandemic and his take on the state of politics in the U.S.

The governor wants all Californians to know he's listening and working to address the state's problems - even if you wanted him recalled. If you think the state is moving too slow on homelessness, he agrees.

"We've taken that $849 million budget and made it $6 billion this year so the opportunity (is there) to do something big and bold in a way that hasn't in the past. That said, I don't deserve patience because people don't have it. But we ask people to consider the investments we will be making have no precedence in California history," said Newsom.

While speaking at an event at the Reagan Presidential Library in Simi Valley Tuesday night, former Ambassador Nikki Haley said Democrats no longer believe in America.

This was Newsom's response:

As the state learns to live with COVID-19 as cases decline, Eyewitness News asked the governor about being the first state in the country to mandate the vaccine in schools for students older than 12 if they want to attend class in-person after full approval from the FDA.

California will soon require all students in both public and private schools to get the COVID-19 vaccine once the shot is fully authorized by the FDA.

"Their kids, if they've gone to school, receive 10 vaccinations - that predates my time - but for measles, mumps, rubella, polio. So reality is it's rather remarkably unremarkable to have another vaccine mandate," Newsom said. "In fact, it's probably the most predictable thing throughout this pandemic, because every single parent understands it because it's already the law. Not just in California, blue state, but all across the United States. I find it the most extraordinary thing I really do. All these Republican governors out there, outraged 'my body.' Yet, they're still residing over states that mandate all these other vaccines."

Having just survived one election, Newsom faces another campaign for his second term just over a year away, knowing his success depends on whether Californians see real progress on issues like homelessness and keeping COVID at bay.