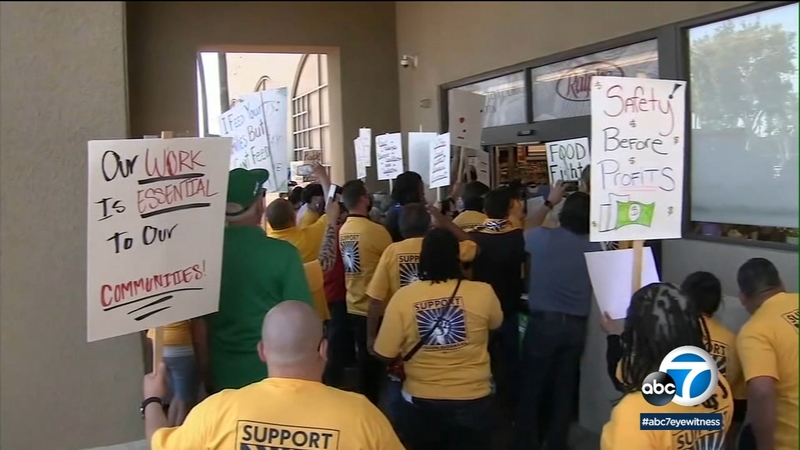 Wage increases include $4.25 per hour over the contract for most workers while some classifications will receive higher pay raises, according to Bertha Rodríguez, a communications coordinator with UFCW Local 770.

For Ralphs and Albertsons/Vons/Pavilions workers, the contract increases the minimum weekly hours of work for eligible part-time employees from 24 to 28 hours, and reduces the time required to move up the wage scale, which also means that more workers will receive their benefits sooner, Rodriguez said.

The new deal also improves dental and vision plans and protects pension benefits. The contract includes provisions to establish health and safety committees at every store, enabling workers to have a say on safety and security issues, Rodriguez said.

"This contract is the beginning of the transformation of the grocery industry,'' said UFCW Local 770 President John Grant. "Members stood up in solidarity not only on the shop floor and at rallies outside the stores but also at the bargaining table.

Inflation jumped over the past year to the fastest rate since 1981, with costs for food, gasoline, housing and other necessities squeezing consumers in Southern California.

When the agreement was announced April 4, Robert Branton, Ralphs' vice president of operations said the company was pleased that this agreement allows us to put more money in our associates' paychecks and secures health care and pension plans.''

Union officials had said they had been seeking a $5-per-hour wage hike, phased in over the next three years, along with bolstered safety standards and "adequate scheduling and hours.''

The stores had offered annual 60-cent-per-hour wage increases over the next three years, totaling $1.80.

A three-year labor contract between the unionized grocery workers and Southern California supermarkets expired March 7. Employees continued to work under the terms of the previous contract.

Members of seven UFCW locals covered by the contract had voted "overwhelmingly'' last month to authorize a strike.