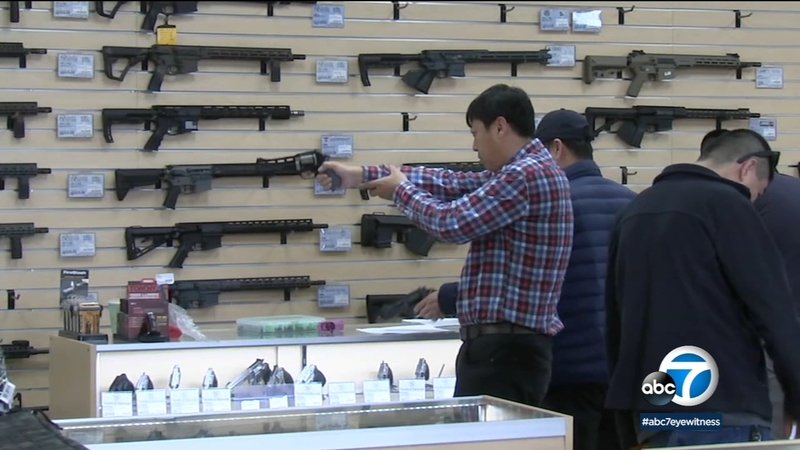 LOS ANGELES (KABC) -- Los Angeles County Sheriff Alex Villanueva is backing off plans to close gun shops in the county, saying he is more concerned with enforcing social distancing and slowing down panic buying rather than closing stores completely.

Earlier Tuesday, Villanueva said he was looking at closing certain nonessential businesses that were not following social distancing guidelines, including gun shops. Some of those stores have reported long lines as anxiety is heightened during the coronavirus pandemic.

But later in the day, Villanueva acknowledged that gun sales are necessary for security and law enforcement personnel, in addition to their protection under the Second Amendment.

"Those that are involved in the security business that still need to do their business ... we want to make sure they're properly equipped," Villanueva said. "However that is not a license for everyone to do panic gun buying and rushing to stores. Which is now what we're seeing. That violates the issue of social distancing."

Villanueva also singled out other businesses which were violating social distancing guidelines, such as strip clubs, saying they will be ordered to close.

The sheriff also announced in order to mitigate the risk of the spread of infection throughout the jail system, the department will be releasing people with less than 30 days left on their sentences.

Villanueva said about 1,700 inmates have been released from L.A. County jails.

Los Angeles County Sheriff Alex Villanueva is backing off plans to close gun shops in the county, saying he is more concerned with enforcing social distancing than closing stores completely.

Over the past several weeks, people stocked up on weapons and ammunition nationwide as coronavirus concerns heighten, sending gun sales at some Southern California stores skyrocketing.

However, Villanueva pointed to safety concerns due to the combination of new gun owners and more people at home under state and local stay-at-home orders.

"We've received complaints from particular businesses who have not been adhering to the social distancing," Villanueva said at a Tuesday press conference. "Chief among them has been gun shops, night clubs, bars and strip clubs."

It is unclear when any businesses will be ordered to temporarily close their doors.

Villanueva said they have not issued any citations to businesses for violating the order.

"We will target businesses or any enterprise that targets a large amount of people," he said. "Our citation efforts will be directed toward them."

"Our staff is not accustomed to this kind of rush," said Lin, who thinks fears concerning the coronavirus are overblown. "I think people need to gather themselves a little bit and take a step back."

Many customers at Lin's store are Asian, and he said some of them are buying guns out of fear of being racially targeted because of the origin of coronavirus.

Meanwhile, police departments have been forced to pare down their operations, with some agencies only responding to emergency calls.