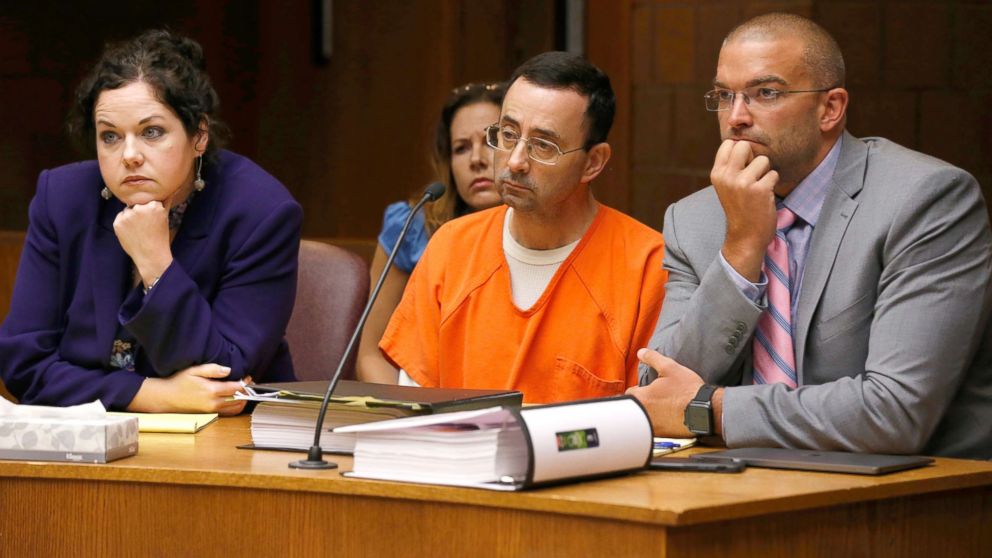 The plea deal calls for a minimum prison sentence of 25 years, and the judge could set the minimum as high as 40 years.

Nassar, 54, answered "yes" to questions during the hearing about whether he penetrated each of the seven girls using his finger without gloves. He acknowledged that his actions were not for any legitimate medical purpose and were against medical protocol.

"I think this is important to have what I've done today to help move the community forward and away from the hurting and let the healing start," Nassar said in a statement to the court this morning. "I'm so horribly sorry that this was like a match that turned into forest fire out of control."

Nassar will be sentenced Jan. 12 at 9 a.m. ET, and the victims will have an opportunity to speak, the judge said.

"You used that position of trust that you had in the most vile way to abuse children. I agree that now is a time of healing, but it may take them a lifetime of healing," Ingham County Circuit Court Judge Rosemarie Aquilina said in response to his statement. "I'm not going to speak for them. They're going to have that opportunity at sentencing, and that will strengthen and heal them. I agree, and I'm glad you recognize that, but it does fall very short.

"But they are strong in numbers, and I'm proud of them. They are superheroes for all of America, because this is an epidemic," she added.

He previously pleaded not guilty to the seven counts. The charges relate to Nassar's time a faculty member at Michigan State University, from 1997 to 2016, when, the university said, he was fired after the allegations surfaced.

Nassar's attorney did not immediately respond to ABC News' request for comment.

Now that the criminal case is over, a civil lawsuit filed by more than 125 women and girls, mostly gymnasts, will be able to move forward. As part of his plea agreement, Nassar admitted that touching the women and girls was not a medical procedure, and he will not be able to use it as a defense moving forward.

Manly said that Nassar's guilty plea does not bring back the innocence of the victims, many of whom were members of Team USA.

White said that they will never know exactly how many people were assaulted by Nassar because, by his own admission, he had done the procedure "thousands" of times.

Olympic gymnasts Aly Raisman, McKayla Maroney and Gabby Douglas have publicly said they were abused by Nassar as well.

One victim, 18-year-old Adrian College gymnast Kaylee Lorincz, said Wednesday Nassar had sexually assaulted her shortly after her 13th birthday. Kaylee Lorincz, who was accompanied by her mother, Lisa Lorincz, thanked the victims who came forward before her, including Maroney and Raisman.

Lisa Lorincz said that she didn't think anyone would believe what happened to her daughter after the incident because Nassar was so powerful.

He is facing lawsuits filed by more than 125 women and girls, mostly gymnasts.

USA Gymnastics said in a statement that it is "very sorry that any athlete was harmed by Larry Nassar. Upon first learning of athlete concerns about Nassar in 2015, USA Gymnastics reported him to the FBI and relieved him of any involvement with USA Gymnastics. Federal and state authorities ultimately charged Nassar with multiple crimes, leading to his incarceration and now his admission of guilt to charges of criminal sexual conduct. We note that affected women contacted by Michigan prosecutors supported resolution by plea, and USA Gymnastics also views Nassar's guilty plea as an important acknowledgment of his appalling and devious conduct that permits punishment without further victimization of survivors."