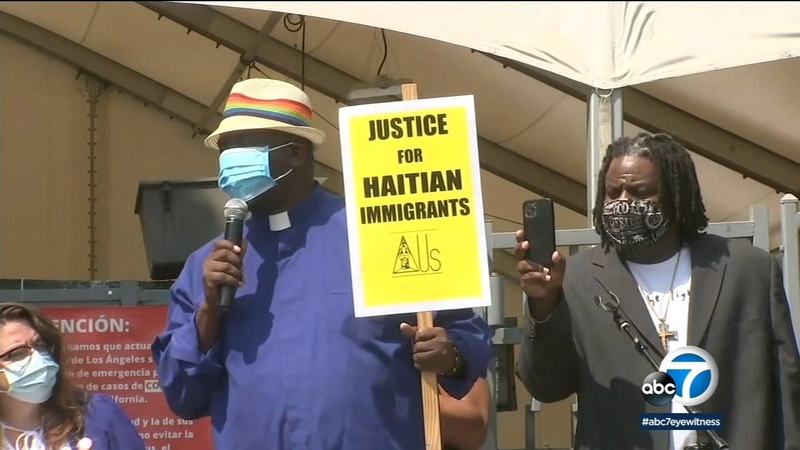 On a national and local stage Thursday, many condemned the Biden administration as its immigration policy played out most visibly in Del Rio, Texas, where thousands of mostly Haitian asylum seekers, including families and children, were seeking refuge.

In Los Angeles, a group rallied outside of the Mexican consulate, calling on both governments to act.

"The American government and the Mexican government, stop mistreating our Haitian folks," said Pastor Cue Jn-Marie of The Row Church on Skid Row.

Rep. Maxine Waters was among many Democrats who condemned the White House over the matter.

Images of border patrol agents on horseback, charging, disparaging and whipping reins at migrants or in the air have caused deep anger. Many of the people running had bags of food in their hands.

"This behavior must be addressed and we must provide accountability," said Sen. Chuck Schumer. "The images turn your stomach."

"We feel those images are horrible and horrific," Psaki said. "There is an investigation the president certainly supports, overseen by the Department of Homeland Security."

DHS is now temporarily suspending the use of horses in patrol.

Republicans say Biden is not doing enough to control what they call a border crisis, while human rights advocates call it a humanitarian crisis and urge Biden to end Trump era policy Title 42. Citing pandemic concerns, it allows the deportation of people seeking asylum before their claims are processed.

"Mark my words," said Nana Gymafi, executive director of the Black Alliance for Just Immigration. "When people look back at what is happening in Del Rio, they will compare it to what we've seen historically when people have been put on trains to their death, because that's what's going on right now."

According to two U.S. officials, many Haitian migrants in Del Rio are being released in the United States, undercutting the Biden administration's public statements that the thousands in the camp faced immediate expulsion to Haiti.

Haitians have been freed on a "very, very large scale" in recent days, one official said Tuesday. The official, who was not authorized to discuss the matter and thus spoke on condition of anonymity, put the figure in the thousands.

Many have been released with notices to appear at an immigration office within 60 days, an outcome that requires less processing time from Border Patrol agents than ordering an appearance in immigration court and points to the speed at which authorities are moving.

The releases come despite a massive effort to expel Haitians on flights under pandemic-related authority that denies migrants a chance to seek asylum. A third U.S. official not authorized to discuss operations said there were seven daily flights to Haiti planned starting Wednesday.