'Hamilton' on Disney+: Lin-Manuel Miranda captures 'lightning in a bottle' to share with worldwide audience

Hamilton' creator Lin-Manuel Miranda captures what he calls 'lightning in a bottle' with his original Broadway cast to share with a worldwide audience on Disney+.
OTRC
By George Pennacchio 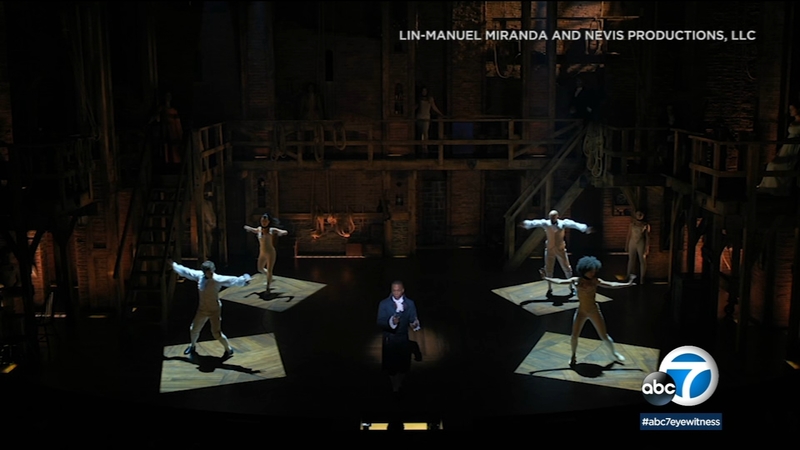 'Hamilton' on Disney+: What you need to know before seeing historical musical

GLENDALE -- "Hamilton" is now streaming on Disney+ but before you settle in to watch, here are some quick facts you need to know.

It runs just about three hours long and it features the original Broadway cast, a production that won 11 Tony Awards and was nominated for 16; it also won the Pulitzer Prize. Rated PG-13, several cast members play dual roles.

"Hamilton" takes place in the late 1700s but cast members involved with the historical musical that blends hip-hop, jazz, rap, pop with traditional musical theatre, see its themes of speaking out and rising up to be as relevant now as ever before.

"I think more than ever we're seeing that we live in a world where we need to actively participate in our democracy and our politics so we can build a world that we want to see," said Phillipa Soo, who plays Eliza Schuyler Hamilton.

"I hope that the message resounds and ripples out in ways that I can only imagine, positive waves that I can't imagine," said Leslie Odom Jr, who won the Tony Award for playing Aaron Burr.

Since its Broadway debut in 2015, "Hamilton" has been a tough, and often expensive, ticket to get. With its streaming debut on Disney Plus, the cast is thrilled to bring this story to a global audience.

"There's something singular about this experience, I'm excited to see the ramifications for that and what it means, the way we can preserve theatrical events going forward," said Daveed Diggs, who plays Marquis de Lafayette and Thomas Jefferson.

The show's creator and star, Lin-Manuel Miranda, with director Thomas Kail, helped preserve this project by shooting it with the original Broadway cast over three nights, with two days of extra filming to get all the shots.

"We have lightning in a bottle with this company that has been performing this show and helped created these roles as I was writing them," said Miranda. "And so we basically self-financed a three-day indie movie."