Meghan gave birth to Lilibet, named after her great grandmother Queen Elizabeth who goes by that nickname, in June this year.
CNNWire
By Max Foster and Amy Woodyatt 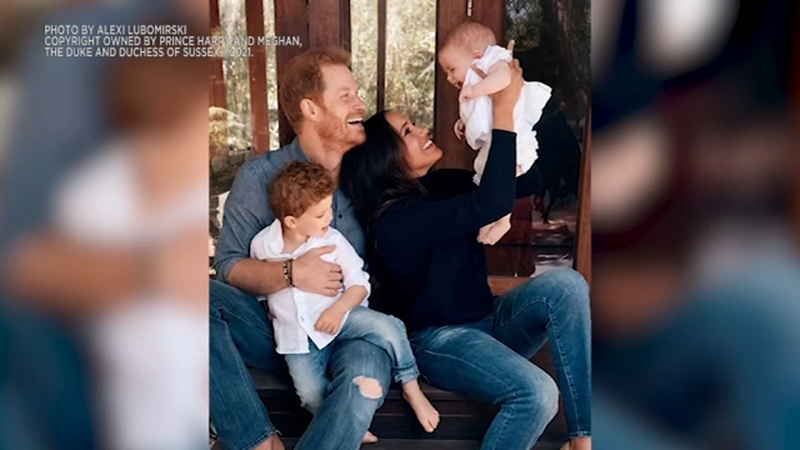 Prince Harry and Meghan, Duchess of Sussex shared the first photo of their daughter, Lilibet "Lili" Diana, as part of their 2021 holiday card, released six months after she was born.

Meghan is seen happily holding Lilibet in the air, while Harry balances their son Archie on his lap in the image, taken by photographer Alexi Lubomirski.

"This year, 2021, we welcomed our daughter, Lilibet, to the world," the couple wrote on the front of the card. "Archie made us a 'Mama' and a 'Papa,' and Lili made us a family."

Meghan gave birth to Lilibet -- named after her great grandmother, Queen Elizabeth, who goes by that nickname -- in a Santa Barbara hospital in June this year.

The royal pair then explained that they were donating money this year to several organizations "that honor and protect families," including those that focus on Afghan resettlement, and organizations supporting paid parental leave in the US.

Christmas is looking a little different for the British royal family this year due to the surge in Omicron cases in the UK.

Harry's grandmother Queen Elizabeth II will be joined by Prince Charles and his wife Camilla, the Duchess of Cornwall on Christmas at Windsor Castle, changing her plans due to the increase in cases.

In a typical year, the Queen travels to her country estate of Sandringham for the family's annual Christmas retreat.

But in recent weeks, the palace has been taking added precautions due to coronavirus, including canceling a pre-Christmas lunch that the monarch typically hosts for extended family.

CNN has launched Royal News, a new weekly dispatch bringing you the inside track on the royal family, what they are up to in public and what's happening behind palace walls. Sign up here.