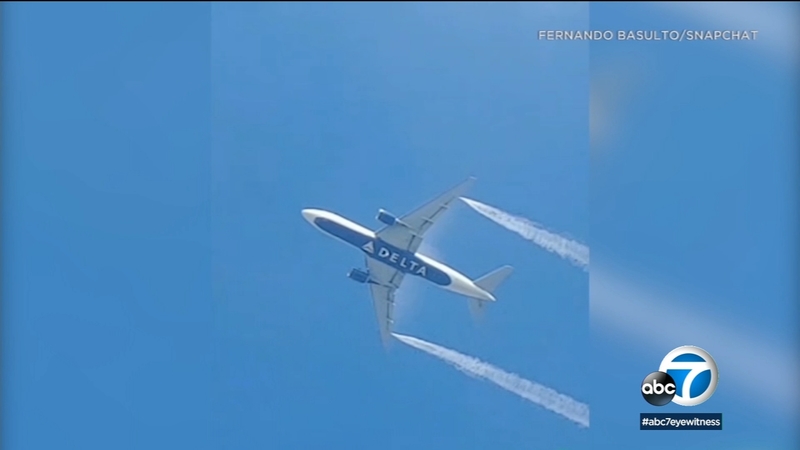 CUDAHY, Calif. (KABC) -- The actions of a Delta flight crew are being investigated one day after the pilot dumped engine fuel over a populated section of the Los Angeles area.

Residents, the Federal Aviation Administration and Delta Airlines are asking whether the fuel dumping was necessary.

The question comes after several schools had to be cleaned up for any possible fuel contamination. The Delta airliner, initially bound for Shanghai, dumped thousands of gallons of jet fuel on neighborhoods east of LAX after the flight experienced engine trouble following takeoff.

The FAA confirmed that air traffic control asked if Flight 89 needed to dump fuel. The typical practice is that the pilot would be directed to the most appropriate location away from people.

Tower: "Bring you back to LAX immediately or do you need to hold to burn fuel? You tell me what you need to do."

Pilot: "We've got the engine - we've got compressor stall. We got it back under control. We're going to come back to LAX. We're not critical."

Tower: "Ok, so you don't need to hold or dump fuel or anything like that?"

The pilot's response was, "Negative, we'll be request runway 25R" but the dump had already happened.

Alex Vargas is among many residents under the flight path who were questioning their own well-being. He complained about having felt skin irritation after the fuel dump.

While the impacted schools have been scrubbed down, neighboring properties have not been.

"My kids still come home, they play outside in the back. I don't know if there any precautions that we should take," said Eduardo Luna.

The Department of Public Health said the fuel strewn in the air has long evaporated and that the school cleanup was precautionary.

"These fuels are still expected to evaporate and should not continue to present a health risk to the public," said Dr. Cyrus Rangan with the L.A. County Department of Health.

The health department advised residents to throw away any backyard fruit in case it absorbed any petroleum component.

The investigation is ongoing. The FAA said there is a scenario in which the plane could have safely dumped the fuel in the same area but the jet would have been so far up, the fuel would have dissipated before hitting the ground.
Report a correction or typo
Related topics:
cudahylos angeleslos angeles countyhazmatschoolslos angeles international airportairlinedeltafuel spillstudents
Copyright © 2022 KABC Television, LLC. All rights reserved.
TOP STORIES
LA County could hit 'high' COVID level in July, prompt return of masks
Here's what to know about the end of CA's eviction moratorium
California late start law aims to make school less of a yawn
LAX expected to be second busiest US airport over July 4th weekend
Woman searching for brother reported missing in Redondo Beach
Lawyer: Nipsey Hussle lifted up neighborhood he was gunned down in
Apple's newest CarPlay feature will make buying gas easier
Show More
How to save money when buying a new car in an inflated market
Orange County confirms 1st presumptive case of monkeypox
OC woman attacked and sexually battered inside Irvine storage facility
Silver Lake restaurant offers free food in exchange for Sriracha
USC, UCLA moving from Pac-12 to Big Ten in 2024
More TOP STORIES News