Emotions boil over at town hall in Cudahy where Delta airliner dumped 100,000 pounds of fuel 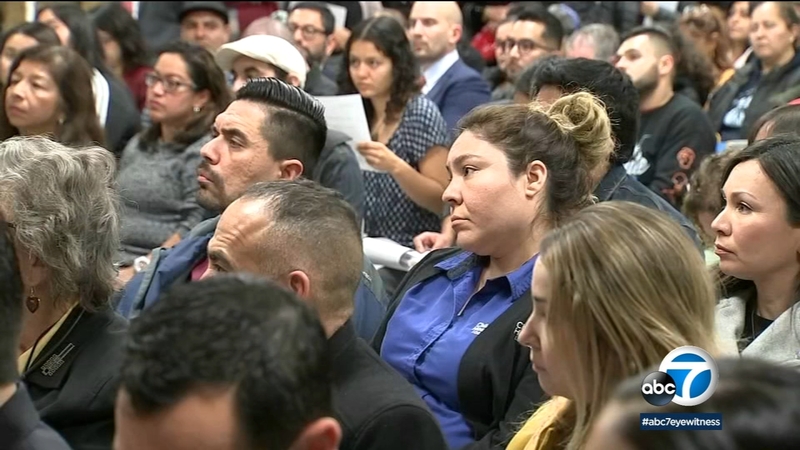 CUDAHY, Calif. (KABC) -- Emotions were boiling over at a town hall in Cudahy where earlier this week a Delta airliner dumped 100,000 pounds of fuel during an emergency landing, hitting at least six schools and likely thousands of homes.

The Federal Aviation Administration released a fact sheet Friday stating that the pilot did not follow proper procedure which requires pilots to alert air traffic control if they plan to dump fuel.

Air traffic control twice asked the pilot whether he needed to dump fuel and twice he said no.

Residents booed a Delta Air Lines representative who attended Friday's meeting who read a statement from the company vowing an investigation.

"The community has a right to seek answers and to feel outraged. It's absolutely an injustice what they're dealing with. It's in our backyard, it's in our schools, in our parks," said Cudahy Mayor Elizabeth Alcantar.

"If you have symptoms, it may already be too late. Maybe your eyes are already damaged. We can't wait for the symptoms to present themselves," said Rep. Maxine Waters.

One woman said her dog passed away Thursday and blames Delta Air Lines for his death.

"His heart stopped beating and they resuscitated him until I was able to get there from work," said Georgina Diaz, South Gate resident. "He was my child, he was my second son so it's really difficult to think that this may have caused it."
Report a correction or typo
Related topics:
cudahysouth los angeleslos angeleslos angeles county
Copyright © 2022 KABC Television, LLC. All rights reserved.
TOP STORIES
7th Highland Park parade mass shooting victim dies
Man dies after being injured by illegal firework in Montebello
IE woman viciously attacked by security guard outside bar, video shows
LA County reports 15,413 new COVID cases over Fourth of July weekend
Parents of late NFL star Demaryius Thomas reveal he had Stage 2 CTE
Man convicted in 2019 Long Beach crash that killed couple, 3-year-old
Highland Park 4th of July parade shooting survivors speak out
Show More
Brittney Griner writes letter to Pres. Biden pleading for his help
What we know about 7 victims of July 4th parade shooting
Some skip Fourth of July celebrations to protest for abortion rights
Illegal fireworks light up night sky across SoCal on July 4th - Video
11-year-old boy dies from fireworks
More TOP STORIES News