What is alopecia? Some of those living with the disease speak out after Will Smith's Oscar slap 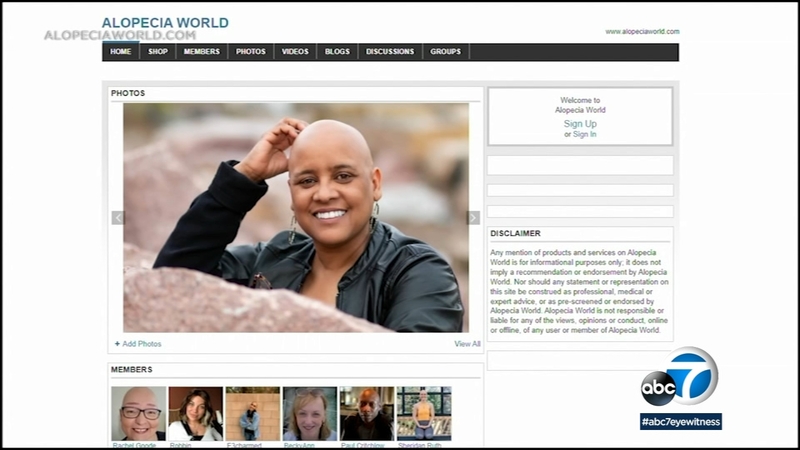 What is alopecia? Some of those living with the disease speak out

LOS ANGELES (KABC) -- It was the slap heard around the world. Will Smith slapped Chris Rock at the Oscars before profanely telling the comedian to keep his wife's name, Jada Pinkett Smith, out of his mouth.

The incident was caught on live television after Rock made a joke about Pinkett Smith's baldness. The actress suffers from alopecia areata, an autoimmune condition that causes hair loss, and is now front and center following the tense moment at the Oscars.

Pinkett Smith has been open about her struggle with alopecia, and says it's the reason she shaves her head. It's not clear if Rock knew that before making the joke.

Many in the alopecia community wish that the conversation had gone differently.

"It's like a proverbial slap. It just really hit all of us in the community," said Alison Keslake who has alopecia.

Keslake owns the Centre Stage Dance Academy in Monrovia. She started losing her hair in 2017.

"Nobody's talking about the fact that Jada Pinkett Smith has alopecia, and that, it's a disease that nobody talks about," she said. "Nobody really knows about."

"Within six months, all of my hair had fallen out," Keslake said. "I did not know why. I didn't know what was happening. I saw every doctor you could imagine."

RELATED | Will Smith apologizes to Chris Rock for slapping him at Oscars: 'I was out of line and I was wrong'
EMBED More News Videos

The best actor winner for "King Richard" apologized to Chris Rock in an Instagram post for slapping the comedian onstage at the 2022 Oscars.

Alopecia can strike anyone at any age. There is no cure or standard of care. At support networks like AlopeciaWorld. founder Cheryl Carvery-Jones said reactions have been mixed.

"I could see that she (Jada Pinkett Smith) was obviously hurt by the comment," Carvery-Jones said. "We have a lot of people who have been bullied at school."

While he was on stage, Carvery-Jones said she wished actor Will Smith had seized the opportunity to educate the public about alopecia.

"You know, it's a medical condition where she loses her hair, and I think the conversation would have been a bit different," she said.

In a statement, the National Alopecia Areata Foundation said, "Simply put the condition is no joke. We stand with the community especially in the wake of emotional moments such as the one we all witnessed last night at the Academy Awards. We encourage both our community and the broader public to learn more about alopecia."

It took awhile for Keslake to put away her wigs and share her condition openly with her dance students. She hopes more people talking about alopecia will help move the conversation forward.

"I just want people to know that they're not alone no matter what they're suffering from or struggling with," Keslake said. "Whether it be alopecia, cancer, or mental health, or anything like that. There are communities out there and you have to find them."