State programs are helping shrink racial and ethnic gaps for uninsured in CA, but inequities remain

Data shows SoCal Latinos have some of the largest uninsured rates. Here's how some groups are trying to close the gaps.
KABC
By Anabel Munoz and Grace Manthey 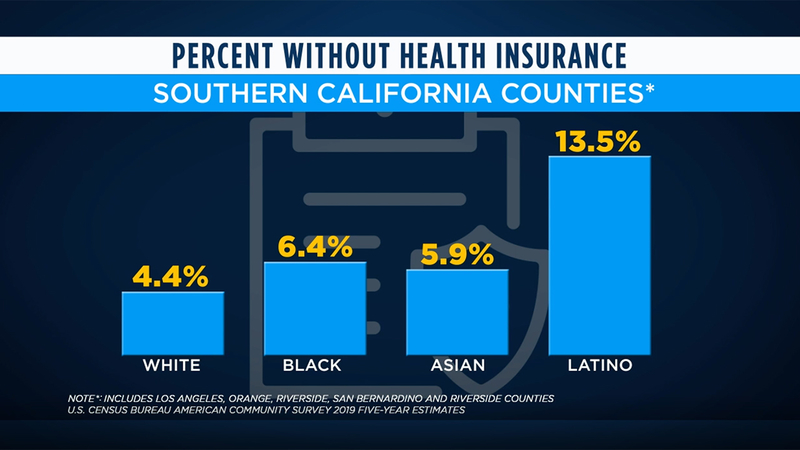 LOS ANGELES (KABC) -- Karla Rodriguez's family moved to Los Angeles five months ago from El Salvador to give her kids a better education and a better life.

Her 8-year-old son has Down syndrome. Someone at his school recommended Rodriguez reach out to non-profit health advocacy group, Community Health Councils, to help with his health care and special needs.

"The truth is that all of this is very new," Rodriguez said in Spanish.

At CHC, community navigators provide much-needed information, support and guidance though the health care system for people like Rodriguez in South Los Angeles and the surrounding areas.

Our America Equity Report: Explore equity data from the 100 largest cities in America

"They don't just do one thing right? Many of them are what we would consider community health workers...they go out and they make sure that people have access to other resources," said Sonya Vasquez, the chief operating officer for CHC.

Rodriguez said she hopes she's not a bother by asking her community navigator, Maribel Rojas, so many questions.

"But she's always been there, very attentive, clarifying things, supporting me," she said.

"We are immigrants and perhaps we don't have rights that citizens do, but California embraces immigrants and offers opportunities that perhaps in other states we wouldn't have. In reality, this is a huge privilege, a blessing for our family to be able to count on something so vital, such as health care and to be able to have access to that," Rodriguez said.

But not everyone has the same access to that vital support.

'There's still much more to go'

Latinos across Southern California counties were uninsured at a rate about three times higher than their white neighbors, according to 2019 census data. About 14% of Latinos didn't have insurance, compared to the white rate which was about 4%.

Uninsured rates have improved in the state since the inception of the Affordable Care Act. For example, estimates from 2013 Census data show nearly 31% of L.A. County Latinos were uninsured, compared to the roughly 14% in 2019.

"Things have gotten better for sure, right? We have a lot of people that are covered. We have a number of new policies and processes that have streamlined the way people enroll, the application process is simpler, we have different procedures for how people can get into the door and to make sure that people don't fall off," said Vasquez.

"However, there's still much more to go," Vasquez continued.

A report from UC Berkeley and UCLA's California Simulation of Insurance Markets, or CalSIM, found that nearly 3.2 million Californians will remain uninsured in 2022, about 9.5% of those under 64. Undocumented Californians make up the largest group of the uninsured, at about 40%.

The report also projected 16% of Latino Californians aged 0-64 could be uninsured in 2022.

CalSIM researchers modeled these projections before Gov. Gavin Newsom signed a bill expanding access to Medi-Cal services - the state's government-run health care program - to Californians over 50 regardless of their immigration status. That's according to Miranda Dietz, a researcher at the UC Berkeley Labor Center and the project director for the CalSIM team.

"Folks who are under age 26 who are low-income and undocumented can get full scope medical coverage through the state and this expands that to be 50 and above," Dietz explained.

"But, as you can imagine that still leaves a significant number of Californians ages 26 to 49 who are low-income and documented who are without insurance coverage," she continued.

Experts said there are other barriers to accessing health insurance besides just citizenship status, such as language, cost and information.

And Sonya Vasquez from CHC said even the lack of access to health insurance and care creates a barrier itself, "for the rest of the community in terms of it being healthy."

"If we had a stronger...a more streamlined healthcare system, maybe we wouldn't have had the gaps that we did with the pandemic," she said.

There are four main ways to enroll in health insurance in California. One, is employer-sponsored insurance. Those who can't get insurance through their job may quality for Medi-Cal, or Medicare if they are 65 or older. For people who don't fall into any of those categories there is Covered California, the state-based health insurance exchange set up under the Affordable Care Act that provides subsidies for people buying private health insurance on a sliding scale based on income.

"Before the Affordable Care Act, it was basically like the wild, wild west," said Rachel Linn Gish, the director of communications for Health Access California, a statewide healthcare consumer advocacy coalition.

If you didn't quality for insurance through your job or for Medi-Cal or Medicare, Gish said you were "left to your own devices."

Insurers could choose their own risk pools, and "only cover the healthy people and stay away from the sick people, which meant that the sick people then didn't have health care coverage," she said.

The ACA made insurance more accessible, but Gish said Covered California is "unique amongst the other state-based exchanges, because of how progressive we made just the consumer-centered design."

She said differences in plans between companies are minimal, which might not be something found in other states.

Sonya Vasquez from CHC highlighted the smoother processes for enrollment in the health insurance system, especially for pregnant women and babies.

"The beauty of California is we've been able to slowly chip away at...only having certain people that are eligible for services, so we have a lot of funding, programming that supports the undocumented children. And now we're going to be having undocumented individuals over the age of 50 that are going to be eligible for Medi-Cal. But again, right now, there's still a lot of challenges and concerns with how people get enrolled," Vasquez said.

Community Navigators at Community Health Councils, like Larissa Bobadilla help Angelenos through those challenges in navigating the healthcare system.

Bobadilla said a lot of the barriers in the system have to do with a lack of current information.

She said even though the 2019 Public Charge rule is no longer in effect, many in immigrant communities still fear they could become a "public charge" by enrolling in any public benefits, jeopardizing any residency status they might have.

Part of the reason families, especially Latino and immigrant families, don't always have access to the most accurate information on the healthcare system is because of language barriers.

"Some people in the community can cannot read, cannot write in English, only in Spanish or in another language," Bobadilla said.

Another barrier is cost. Premiums can be high for some families, said Bobadilla, even with the subsidies provided by Covered California.

The Biden Administration's American Rescue Plan has brought the cost down for many subsidized plans, experts said. For qualifying families, premiums are capped at 8.5% of income and some can qualify for plans costing as low as $1 per month, though these extra subsidies are set to expire in 2022.

Sonya Vasquez, also from CHC, pointed out that many people became newly eligible for public systems like state-sponsored or state-subsidized health insurance because of pandemic-related job losses.

"They had never had to access public systems before and they didn't know how to do that," she said.

Californians who don't purchase health insurance may be subject to a tax penalty of at least $750 per adult and $375 per child, with exemptions based on income or economic hardships.

Some families might just pay the penalty if they think they can't afford the premiums, but Bobadilla said she spends a lot of time explaining to her clients why health care coverage is important.

She said sometimes her clients don't understand how much hospitals can cost if people get sick. Once she tells them that an emergency room visit could cost $60,000, they often change their minds and enroll instead of paying the tax penalty.

"When you (take) a lot of time to explain to the families, what is the issue...they understand," Bobadilla said.

Rachel Linn Gish, from Heath Access California, said one of the biggest goals for the consumer advocacy group is guaranteeing access to all undocumented Californians, including those aged 26 to 49 who are still ineligible for Medi-Cal.

"We believe in universal health care coverage so we're not going to stop until everyone who calls California home can access the care that they need," said Gish.

Heath Access California is also pushing for extensions to the expanded government subsidies, so those that saw huge decreases in their Covered California plans as a result don't see their premiums spike in the future. The group is also working on reforms to lower costs and increase access for prescription drugs.

"Our work with universal coverage, our work to cover the undocumented, our work to lower the cost of care, that's our bread and butter and we'll keep on doing that," said Gish.

Sonya Vasquez from Community Health Councils said the fact that these gaps still exist is "appalling."

As someone who helps many families get health insurance coverage, Larissa Bobadilla said her hope is also universal health coverage. But in the meantime, she said her work in the last 15 years as a community health navigator is rewarding not just professionally, but personally.

She said a few families she's helped for years have come to her after losing a family member. One couple even asked Bobadilla's permission to name her daughter after her.

"It's just like a connection between the community and the person who I am," she said. "I am very happy to be working with this role for many years, because I am helping a lot of people."

Karla Rodriguez, who was able to secure health insurance for her family with the help of CHC's community navigators, has been grateful for the help.